No Aurora for Me, But Jupiter and The Moon Were Nice Together 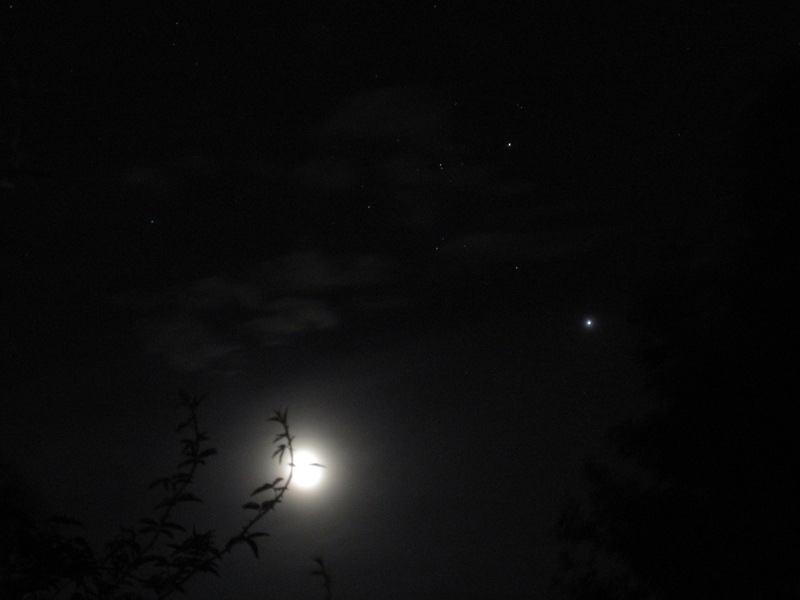 The sky was clouded out over the South, so no chance of aurora fro me (although I did get to see the Adelaide FEstival spotlights reflected nicely.

I did get this picture of the Moon close to Aldebaran and Jupiter. The Moon is overexposed to bring the stars out through the thin cloud covering g everything. They will be even closer tomorrow, so it should be good to photograph.

Comments:
Hi Ian, sorry about the long questions I asked you in your previous blogs, I just couldn't understand some of it, but according to messierhunter last year he said the green asteroid was on the original DSS plate and that was dated EPOCH 1996, when the image was uploaded, so does that mean it's still old Palomar data and if that's the case why did Universe today say that it wasn't on DSS plate but messierhunter has named the plate on the FITS plate and you see the exact image that was used in the video(defect) are they just meaning that there is no asteroid and why would Universe today check the SDSS if it's EPOCH 1996, I hope you can please reply back to me this time, i'm just a bit afraid and i'm sure at one time you didn't know everything about space so I am just trying to learn a bit, thanks.

Sorry Ian, I meant to say that messierhunter got the raw FITS plate with the image that the guy had on his video, and it was dated EPOCH 1996 on the DSS and that Universe today said there was no asteroid at the various sky surveys, but I thought they would have put a bit of time into it like messierhunter did and said it was a defect on one of the plates instead of checking the SDSS as it definitely wouldn't have been there as that is a lot newer.