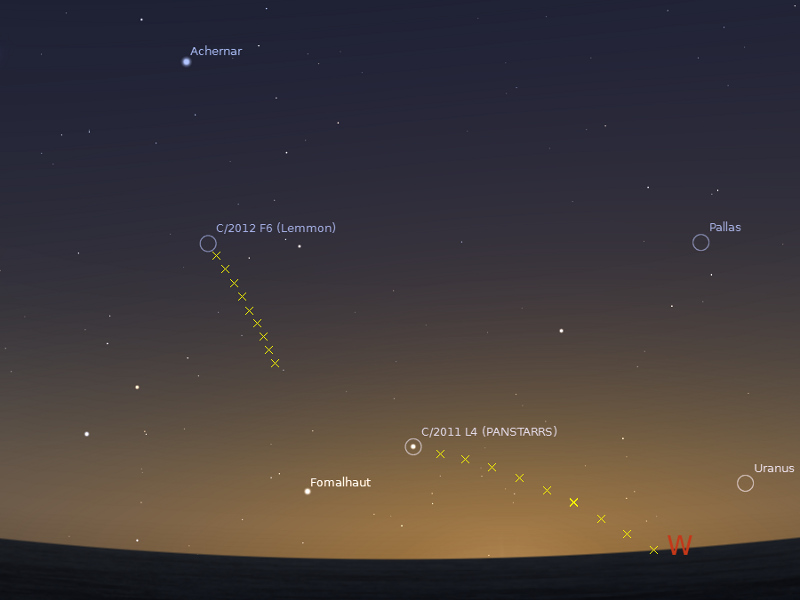 Comet PanSTARRS starts off around a hand-span and a half  above the horizon about 3/4's of an hour after local sunset (that's roughly 8:30 in Adelaide, 6:50 in Brisbane etc.).  Although comet PanSTARRS comes closer to the horizon each day, twilight also occurs earlier, so you should look somewhere between 3/4's of an hour to an an hour after local sunset each night, or possibly earlier. PanSTARRS is now visible to the unaided eye, with a magnitude of 2.8 being reported. You may try looking earlier.

The comet  is quite small, with a star like nucleus and a short tail, you may find it easier to find the comet first in binoculars, then finding it with the unaided eye when you have located it in binoculars (update, based on tonight's reports it should be reasonably obvious, and well get better each night).

Animated GIF showing the movement of the comets from 2 March to 11 March (click to embiggen).

PanSTARRS will continue to get brighter over the next few days, being closest to the Earth on the 5th of March and closest to the Sun on the 10th. There are good prospects for it to get as bright as magnitude 1, which will make it quite visible in the twilight.

You will need a flat, unobstructed horizon like the ocean, or a high lookout or flat plains, to see the comet.

In contrast, comet Lemmon is around magnitude 5, and you will need to wait until astronomical twilight (an hour and a half after sunset), to see it, and then it is really only visible to the unaided eye in the countryside. It looks very nice in binoculars though. Those with decent cameras may wish to photograph the two comets together.

Comments:
Thanks so much for all the information Ian - I really enjoy reading your Blog on a regular basis! Just popped outside and got a really good view of Panstarrs above the trees. Very beautiful and what a tail ! :)

Please, please don't use "embiggen" unless it is a joke. It is another USAn fabrication. "Enlarge" is already a word, and will do the job!

I don't see what's wrong with embiggen. It's a very cromulent word.

Exactly, it's a joke from a TV show and is on its way to becoming an accepted word. Quiz was made up too, and laser and enlarge some long time ago.

Anyway, my first clear evening in weeks - I saw both comets !!! Of course the local sports oval was in line with C/2011 L4 PANSTARRS and the lights were on until it had almost set. Still happy ...
Thanks for the star maps Ian

Had a visual on Lemmon - quite impressive!!! Will look a little lower and earlier for PanSTARRS tomorrow night!!! Thanks for the good info Ian....

As the annonymouse said, embiggen is a perfectly cromulent word.

Congrats to everyone who has seen PanSTARRS and Lemmon. They are beautiful aren't they.

Great work here, thanks for the info. very much appreciated.