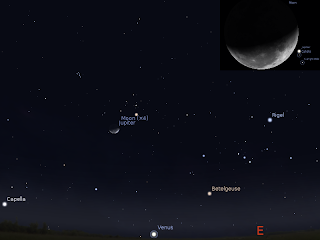 The crescent Moon will occult the planet Jupiter in the early morning hours of August 12 as seen from Darwin. In Australia all other cities and locations south of Darwin will see Jupiter very close (less than half a fingerwidth) to the Moon (it alos missed in Papua New Guinea).

Some places in Indonesia (eg Jakarta) will see the  Jupiter emerge from behind the Moon around 4:40 local time. The Moon covering Jupiter occurs to close to  Moonrise to be seen from these locations. 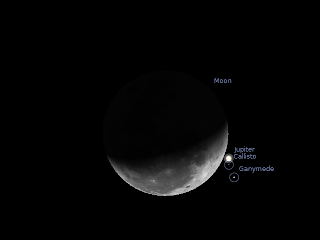 While this event is easily seen with the unaided eye, binoculars (best mounted on a tripod) or a small telescope will make this a spectacular sight, and you can watch the Moons being occulted as well.

Jupiter will disappear behind the bright limb of the Moon at 4:07 am local time in Darwin, followed by Ganymede. Io and Europa reappear from behind the dark limb at 4:40 am, followed by Jupiter at 4:41, then Callisto and Ganymede (4:47 and 4:51 respectively). Astronomical twilight begins at 5:50 am in Darwin, so it should be sufficiently dark for good viewing.

For the rest of Australia, Jupiter is closest to the Moon at around 5 am local time.

On the morning of the 12th, as well as Jupiter being close to the Moon, Jupiter's satellites play hide and seek with transits of Io and Europa. Well worth a look in even a small telescope.

As the sun rises on the 12th, this is also an excellent time to try and see Jupiter in the daylight, using the crescent Moon as your guide.

Comments:
Is there a chance of us Americans seeing this? I saw this come up in my astronomical calendar.

Sorry, no (and sorry for the late reply, been away from my computer)

A Plea for Sky Literacy
Carnival of Space #261 is Here!
Curiosity Parachutes to Mars, snapped by the MRO
The Sky This Week - Thursday August 9 to Thursday ...
There are Three Mars Rovers Hidden in this Picture...
Live blogging Curiosity's Landing
Mars, Saturn and Spica, 5 August 2012
What will Earth Look Like from Curiosity's Landing...
Watch Curiosity Land (or not) on Mars
Foggy Morning