Will the Fragments of Comet Elenin Rain Doom upon the Earth? (No, but You Knew That) 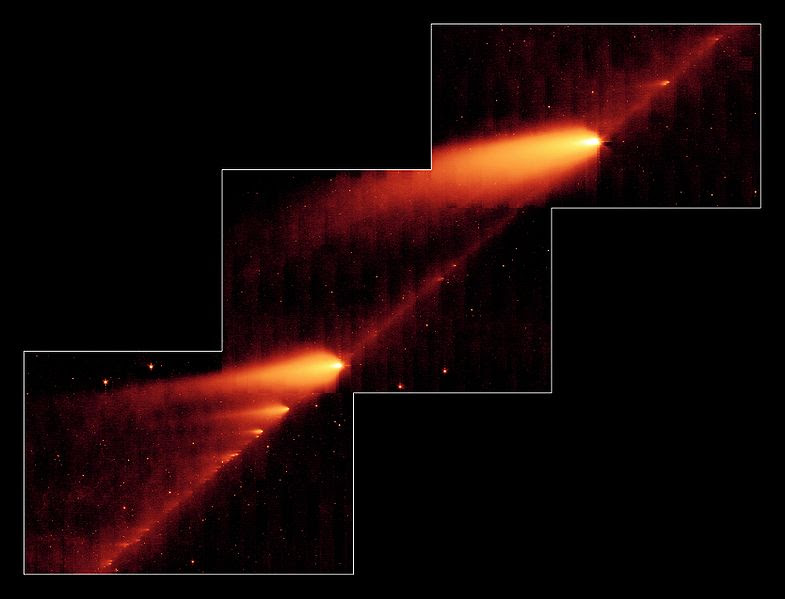 Now that Elenin is disintegrating, some people are worried that chunks of the disintegrating comet will hit Earth. But what people fail to realise is that space is really, really, REALLY big.

That sounds a bit patronising, but is actually very hard to get a good grip on the distances involved, the mind reels from the vastness.

To get a feel for what the distances are like, try this demonstration.


Get a pea, a peppercorn and a mustard seed (or objects with those rough general dimensions). Put the pea on your back doorstep, that’s earth. With a ruler measure out 384 mm and put the peppercorn 384 mm away from the pea, that’s the Moon. Now pace out 35 meters (yes, you read that right 35 meters), that represents the closest approach of Elenin to the earth. Put the mustard seed there (it’s actually much bigger than Elenin would be at that scale, but it’s the smallest object that you can actually work with).

* When comets break up, most of the material stays on much the same orbit as the parent comet (see image of 73P above as an example). Over the years it will spread out a bit, but for Elenin the material won’t move far enough away over the next few weeks to register on our model. Even if Elenin had undergone a DeathStar like dramatic explosion, rather than the gentle sigh and crumbling, the vast distances involved would mean that the material would not impact the earth.

Comments:
In a universe this big and at this scale, we must also observe these other pertinent facts. If you now take the hamer and smoosh the pepercorn and pea and combine with the mustard seed. Adding a drop of olive oil as a waterplanet (ocean) equivalency. The resultant medium when subjected to an electical shock, say a car battery, fully charged of course. Will as a result of infinte probability be able spontaniously process random facts, figures and faiths into an incoherant rant. While the volume of this medium is mostly made up of the pea. The effect is only practically measureable after the pea is smooshed. As it has been proven in many social experiments that communication with pea brained life forms is mostly impossible.

Please do not try this experiment at home, especially around dinner time. As we all well know that your mother will make you eat your peas. If you have progressed through the smooshed phase and applied the correct charge for the amount of peas on your plate. The now active medium should definitely not be eaten. It has proven laxative like effects. The resultant verbal diarrhea containing any unsmooshed peas launched at the speeds possible can be very messy when stepped upon by unsuspecting dinners near the table.
Of course the inactive medium, of smooshed peas with pepper, mustard and olive oil would make an interesting side dish when served with Nan bread.

I think your describing my dining area fter the three year old had his comets<<<< I mean peas this evening ... aren't you CometAl ?

Yes , It can be proven that the unsmooshed pea is rarely constrained within the plate edge event horizon, no matter how massive the plate…. 8)