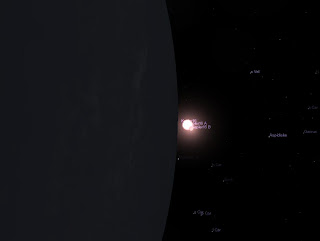 The Star Kepler16 B about to eclipse Kepler16 A as seen from Kepler 16 (A/B) b. Image simulated in Celestia.

Well, it's now clear why representatives of Industrial Light and Magic (Lucas Films) were at the NASA press conference this morning. The Kepler team announced the finding of Kepler-16b, a world that circles two suns, like Tatooine from Star Wars.

Admittedly, Tatooine orbited two stars that were very like our sun, while Kepler 16-b sun's are mismatched dwarf red stars. Also, Kepler 16-b is about 2/3rds the size of Jupiter, like Saturn, and just outside it's habitable zone; more like Hoth or Bespin than the parched, rocky desert world of Tatooine. 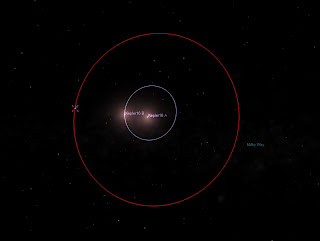 It's also not the first world in a multiple star system, although a white dwarf/pulsar system isn''t very Tatooine like. We've even found a planet in a triple star system as far back as 2005, but it is the first world that circles both stars, and both of which are at least notionally Sun-like. What does it mean overall? We originally thought that it would be difficult for planets to form around close binaries, that the dynamics of binary star formation would disrupt any protoplanets. Kepler 16 b shows that recognisable worlds can also form under these conditions, which greatly expands the number of stars which can have planets.

What does this mean for finding life? In this case Kepler 16 b is just outside the habitable zone, but a moon with a thick atmosphere might be warm enough for life. Another issue is whether the varying distances of the component suns would make planetary temperature swings too large for any form of complex life.

For Earth, the major driver of seasonal variation is the angle of inclination to the Sun, rather than the distance (northern hemisphere summer occurs at aphelion, when the earth is at it's furthest from the Sun, but Kepler 16 B comes closer and further from this world than Earth does to our Sun, and 20 day seasons could be interesting.

NASA's Kepler website has some good illustrations and animations, as well as some "Artists Concepts" with the press release. You can find more thoughts on this report at Universe Today, the Bad Astronomer, Greg Laden's blog and Dynamics of Cats. The original paper can be found here.

Of course, I've made a Celestia file. Two actually, one for the binary star system and one for the planet. I've had to guess the distance of the main star from the solar system barycenter, based on the illustration in et al., 2011, but the rest comes from the discovery paper except for the rotation period of the B component.

As usual, copy the data here to plain text files (Kepler16_binary.sts and Kepler16b.ssc), the copy both the files to the Celestia extras folder. The stars are 195 lightyears away, so in the Celestia star browser, you will have to show around 250 stars to see Kepler16 in the list. I'll have to update my Celestia Exoplanet Tour as well.

# Saturn-like world that orbits a binary star system, a bit Like Tatooine