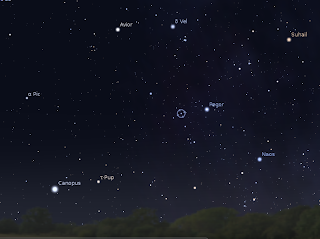 V Puppis, an Algol-style variable star that can help show that the Earth orbits the Sun.

How can we demonstrate that the Earth orbits the Sun, using simple amateur astronomy kit? I've discussed this before, but I have been inspired to visit the idea again by two things; firstly, the new astronomy stack exchange (as mentioned by the Bad Astronomer), particularly the stack on determining how to determine if the Earth orbits the Sun, secondly the report that a group misrepresented themselves to astronomers to make a film promoting geocentrisim.

So,what is the simplest way to show the Earth orbits the Sun. This is a slightly different question from showing that the other planets orbit the Sun. Remember, there are two models that have the Sun orbiting the Earth, the Ptolemaic system and the Tychonian System. In the Ptolemaic system the Sun, all the planets and the fixed stars revolve around the Earth. In the Tychonian system the planets orbit the Sun and the Sun orbits the Earth.

To disprove the Tychonian system you need a bit more. Things like the aberration of starlight and parallax shift are a bit beyond the average amateur with an average telescope. But there are two ways you can show that Earth orbits the sun with just binoculars. 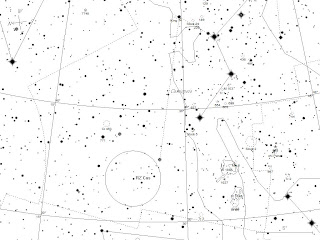 The first way is the annual variation in the paths sunspots take across the sun (explained here, and with a diagram at the end of the post here).

But I've just found another one. Using the time lags in the timing of maxima of of Algol -type variable stars over the period of a year, you can show that the Earth revolves around the Sun.

The basic idea is that the finite time it takes for light to cross the Earths orbit will cause the time of the Maxima of variables to differ by +/- 5.3 minutes. The details can be found here. The author used RZ Cassiopea, an Algol-style variable which has decent magnitude fluctuation that can be picked up in decent binoculars. The maxima and minima can be adequately timed with a good quality watch.

Of course, it takes some time to meausre the maxima and minima, and you need a couple of years of data to do it accurately, but it can be done by amateurs armed with nothing more than binoculars and a decent watch. For Southern Hemisphere observers, RZ Cas is not visible, but V Puppis, an Algol-style variable with a period of 1.4545 days may be an acceptible subsitute, although it may be below the horizon at some points.

Not that this will convince die-hard geocentricists, every observable motion, from Sunspot movement to the abberation of stratlight to changes in maxima timing to parralax motion is due to a magical aether (the one that was shown to be non-existent by the Michelson-Morley experiment) or magical properties of high altitude winds.

But you can do it yourself to your own satisfaction.