The Full Moon is Tuesday May 17. Venus, Mercury, Mars and Jupiter are visible close together in the early morning and form some nice patterns with each other. On May 12th Venus and Jupiter are close with Mercury nearby. On May 17th there is a particularly interesting pattern of planets. 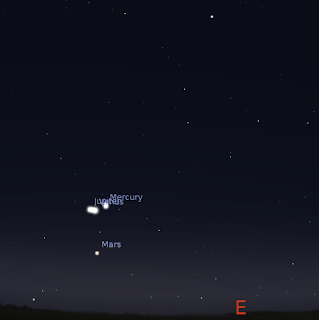 Morning sky looking east as seen from Adelaide at 6:00 am local time on Thursday May 17 showing Venus near Jupiter and Mercury with Mars below. Similar views will be seen elsewhere at the equivalent local time. Click to embiggen.

The Full Moon is Tuesday May 17.

This week sees the bright planets have still more close encounters with each other as part of a "Planet Dance".

Bright white Venus is readily seen in the early morning sky. Venus is "gibbous" phase, and is nearly "full". Near Venus are Mercury, Jupiter and Mars .

Mercury is readily visible in the eastern twilight not far below Venus. This and the next week remain the best time to see Mercury in the morning this year. On the 12th Venus and Jupiter are at their closest, with Mercury nearby. Jupiter heads higher in the sky while Mercury and Venus remain close for some time. Mars is faint below the three. On the 17th the four planets make an interesting pattern in the sky. 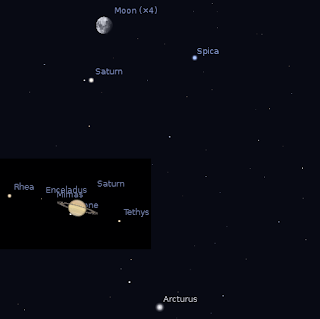 Evening sky on Saturday May 14 looking north as seen from Adelaide at 9:00 pm local time in South Australia showing Saturn near Spica. Similar views will be seen elsewhere at the equivalent local time.

Inset,the telescopic view of Saturn on the 7th , you will need a fairly large telescope to see any moon other than Titan. Click to embiggen.