Welcome to the 198th Carnival of Space, this time hosted in the Southern Hemisphere. We have lots of good stories for you this week. 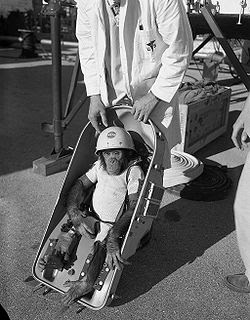 Primates in Cans:
(10 points if you can name the SF author that inspired this title)

Over at the Next Big Future, putting primates in cans is considered, deeply. Robert Zubrin proposes using three Spacex Falcon Heavy launches to send two people to Mars by 2016. And TNBF follows up with Zubrin provides more explanation of his Space Falcon Heavy Mars Plan.

Vintage Space reminds us that Wednesday May 25 marks the 50th anniversary of Kennedy's pledge to send American astronauts to the moon and return them safely to Earth.

The Spacewriter exults over the successful launch of Endeavour on Monday, May 16th.

At the Universe Today, DARPA Wants Your Ideas for a 100-Year Starship 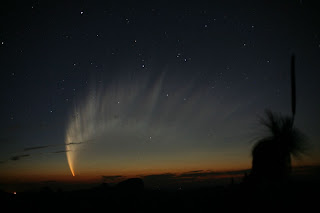 Astroswanny checks in on Comet Elenin and captures a 1500s color image with Asteroid (1793) Zoya and (7503) 1996 VJ38 travelling in the opposite direction on the plate. Speaking of Elenin, I try and dispell some misconceptions about the brightness of comets.

The Dawn spacecraft has taken its first photograph of asteroid Vesta. Dawn is due to rendezvous with Vesta on July 15, part of a journey that will take the spacecraft to Ceres in 2015.

Discovery News suggests that sometimes, Earth just needs to take one for the team. But how can we mitigate the worst an asteroid impact can inflict?

Cheap Astronomy presents a podcast exploring the logic of suggesting that tidally locked objects spin on their axis.

Weirs warp blogs about how planetary scientists use the look of planets and moons to find out information about their past. New maps of the moon have been put together that reveal the slopes and roughness of the moon’s surface.

How many discoveries of the century have you made this year, Chandra? 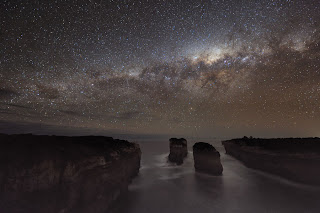 Starry Critters explores the nebular glow of the newly released Hubble image of Messier 8 as well as a zoom of a HiRISE image.

We are all in the Gutter ponders: What is a white hole? Could it explain the mysterious gamma-burst objects we see? How does Fred fit into this? This post attempts to provide the answers.

Weird Warp reports that a massive search for alien life on 86 exoplanets has just started. The search will use a large radio telescope in West Virginia to listen for signs of life. These 86 planets have been picked from a list of 1235 planets which have been identified by NASA’s Kepler space telescope. 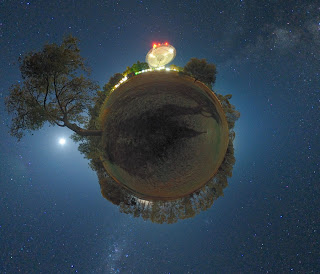 But Centauri Dreams is skeptical, pointing to the possibility that the ten candidate planets revealed by gravitational microlensing might have host stars after all. And do we really understand planet formation well enough to rule out something other than planetary ejection as the cause for rogue planets?

Vega00 releases chapter #21 of Introduction to Cosmology, in which is explained a way to determine the age of the Universe.

The Next Big Future reports that NASA confirms that they are conducting experiments to confirm the Widom Larsen theory of cold fusion.