The Last Quarter Moon is Saturday March 26. Venus is visible in the morning sky initially in the constellation of Capricorn then in Aquarius. On the 27th Venus is close to Neptune. On the 31st the crescent Moon is close to Venus. Saturn is well placed for telescopic observation. 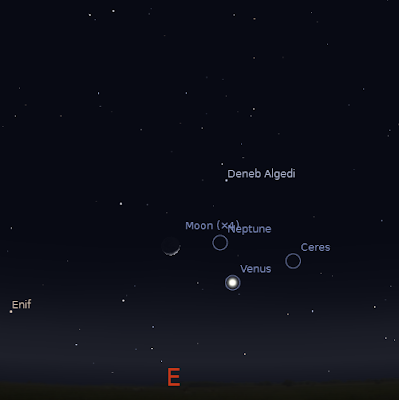 Morning sky looking east as seen from Adelaide at 5:30 am daylight saving time on Thursday March 31 showing Venus in Aquarius, not far from thecrescent Moon. Similar views will be seen elsewhere at the equivalent local time. Click to embiggen.

Bright white Venus is readily seen in the early morning sky. This week it moves from the constellation of Capricornus (just underneath the bright star Deneb Algedi) to Aquarius.

On the 27th Venus is within 0.4 degrees of Neptune, you will need a decent aperture telescope and a widefield lens to see them both together.

On the 31st Venus is close to the crescent Moon. 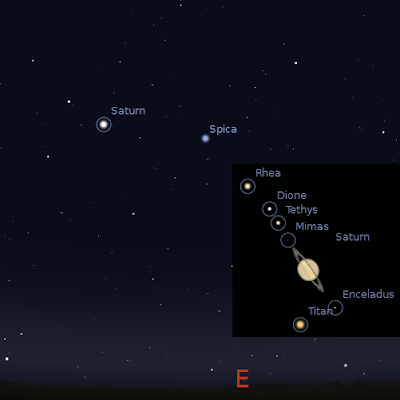 Saturn is rising well before midnight, and is high enough for telescopic observation in the late evening, although it is still best seen in the early morning. It readily visible as the bright yellowish object not far from the bright star Spica.

Even in small telescopes you can see Saturn's rings and it's moon Titan. Titan is close to Saturn on the 24th.

Mars returns to the morning sky by the 31st, faintly visible low in the estern twilight.

Where Is MESSENGER Now?
In the Aftermath of the March 19 “Supermoon”
Perigee Moon, March 20th 2011, 4:40 am
Now Showing at the Balck Diamond Gallery Port Ade...
Carnival of Space #189 is here.
Filtered!
March 20th's Big Full Moon- You Have to Be Up Early
MESSENGER live webcast on NOW!
On the Radio Once More
Comet 2010 X1 Elenin for Celestia and Stellarium