The Full Moon is Friday February 18. Jupiter is seen low in the early evening sky. Venus is visible in the morning sky in the constellation of Sagittarius. Venus comes close to some moderately bright stars during the week. Saturn is well placed for telescopic observation, and is visited by the Moon on the 21st. Vesta near clusters. NanoSail-D photography competition. 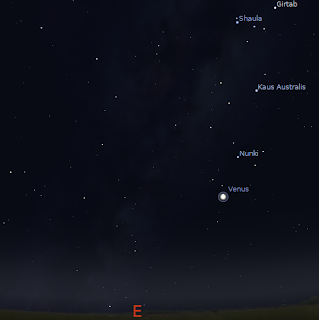 Morning sky looking east as seen from Adelaide at 5:00 am daylight saving time on Saturday February 19 showing Venus near Sagittarius. Similar views will be seen elsewhere at the equivalent local time. Click to embiggen.

The Full Moon is Friday February 18.

Bright white Venus is readily seen in the early morning sky near the handle of the "Teapot" of Sagittarius. 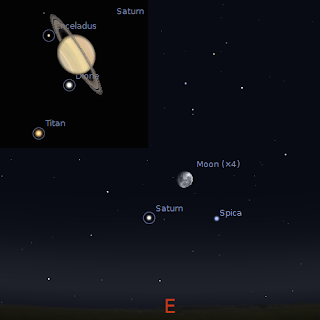 Morning sky on February 21 looking east as seen from Adelaide at 11:00 pm daylight saving time in South Australia showing Saturn near Spica. Similar views will be seen elsewhere at the equivalent local time.

Inset, the telescopic view of Saturn on the 21st (and on the morning of the 22nd), you will need a fairly large telescope to see any moon other than titan. Click to embiggen.

Saturn is rising before midnight, but it is high enough for telescopic observation in the early morning. It readily visible above the northern horizon, not far from the bright star Spica. On the evening of the 21st (and the morning of the 22nd) the waning Moon forms a triangle with Spica and Saturn.

Even in small telescopes you can see Saturn's rings and it's moon Titan. Over the week Titan draws close to Saturn.

The asteroid Vesta is quite faint (magnitude 7.8), so you need binoculars to see it and may need to watch over a number of nights to make sure you are seeing it. However, between the 16th to the 2nd Vesta in between Scorpius and Sagittarius and passes between the globular cluster M22 and the open cluster M25 in the morning sky. On the 23rd it is almost on top of the cluster Cr 394 (see printable PDF map here). You will need to get up a bit before 5:00 am local daylight saving time when the sky is still very dark. You will also need good, steady binoculars or a small telescope, and to make sure your eyes are dark adapted, in order to see Vesta, but it will be worthwhile. 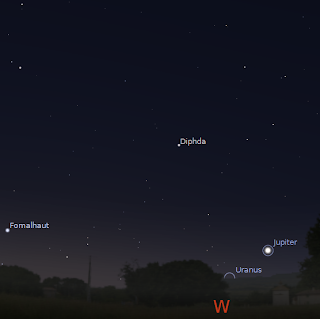 Jupiter can be readily seen from twilight until it sets in the early evening. Jupiter is above the north-western horizon, setting around 10:00 pm daylight saving time.

Jupiter is too close to the horizon for good telescopic views (apparently the southern equatorial belt is back), but its moons are excellent in binoculars.

As Jupiter sets fairly early, there are limited opportunities to see cool Jupiter Moon events (scroll down until you hit Jupiter), but it's worth having a look anyway.

AS I noted last week, NASA is holding a competition for images of the Solar Sail satellite NanoSail-D, descriptions of the competition and and details of how to find the satellite are at the NanoSail-D photography competition link.