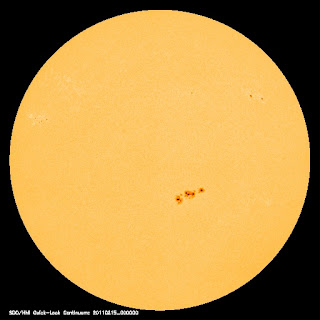 The Coronal Mass Ejection (CME) from the first flare should hit sometime between February 15 and 16, people in high latitudes (eg Tasmania and Southern New Zealand) should be on the look out for aurora. However, the Australian IPS has not yet issued a geomagnetic alert, so it might be a fizzer from the Southern hemisphere.

Aurora can occur anytime, but it is often best to look after midnight. However, due to the complexities of the interaction between the CME and the Earths magnetic field, a CME strike is not guaranteed to produce an aurora.

UPDATE: 1158 Just blasted out an X1 class flare, not sure if it was Earth directed though.

Comments:
Wow. I hope we get to see something. Thanks for the updates!

The Sky This Week - Thursday February 17 to Thursd...
Rob McNaught Bags his 58th Comet
SA Australian Science Communicators - Speed Networ...
Stardust and Comet Temple 1, Again (February 14).
Carnival of Space #185 is here (Valentines Day Edi...
Venus Near M22 and M25 On Saturday 12 Feb, 2011
99942 Apophis, This is Not the Killer Asteroid You...
Cool Visualization of the Kepler Extrasolar Planet...
Venus and Vesta (sort of) Thursday 10 Feb 2010
Comet 103P/Hartley near M50 (and the Glory Fades)