An Aboriginal Stonehenge and Indigenous Skies 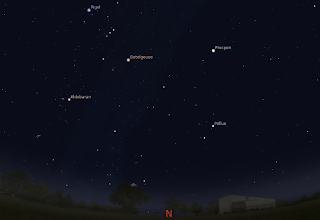 The evening sky around 10:00 pm daylight saving time in February in Australia.

The indigenous people of Australia had a rich lore associated with the sky, only fragments of which remain. To the Boorong people of Victoria, the Saucepan of Orion's belt is a group of young men dancing (Kulkunbulla) to music played buy a group of young women (Larnankurrk) represented by the Pleaides (the small cluster off to the left). Gellarlec, the rose coloured Cockatoo (Aldebaran) sings and beats time. To the east, the twins Yurree and Wanjel (Castor and Pollux) hunt Purra the Kangaroo. To the Karuna people of the Adelaide Plains, Orion's belt was the Hunter Tinniinyarra, to the Yonglu people, Orion was a canoe with three men fishing.

As you can see, some of the indigenous Australian constellations were similar to those of the Greco-roman constellations westerners are familiar with, while others are quite different. The sting of Scorpius the Scorpion is variously the head of Ingalpir, the crocodile, Karick Karick a pair of hawks or a fringe of feathers around the wings of dark constellation the Emu. This underlines the fact that constellations are human constructions (a Gellarlec zodiacal constellation would be cool though, with all those stubborn, steadfast Taureans finding they should be garrulous, flighty and given to chewing things).

Aboriginal sky lore went beyond constellations and their associated stories though. Listening to ABC radio national two week ends ago, I learnt of the stone circle Wurdi Youang in Victoria, an egg shaped stone arrangement built by the Wathaurung people. It is aligned east-west, with groups of stones indicating the setting position of the Sun at solstices and equinoxes. We know that indigenous Australians were acute observers of the natural world, but this is the first physical evidence we have of the detailed attention they gave to the sky. The site has been compared to Stonehenge, in terms of it's significance in our understanding of Indigenous Australians relationship to the sky.

While not on the same scale as Stonehenge, the organisation required to move these stones in place would have been considerable. This ring also strikes at the myth that indigenous Australian built no permanent structures, and extends the list of things they did build (from aquaculture dams to stone huts). Actually determining the locations to place the stones would have been relatively easy for long term sky observers, with access to sticks and string.

Unfortunately, we have lost a lot of the indigenous lore about the sky, and with it the significance of the ring to the local peoples. In the light of all that indigenous Australians have lost, this may seem a small thing, but the skies are a shared heritage, and a source of wonder for all. We are all diminished by this loss.

Comments:
Over here in WA professional astronomers/physicists have actually got together with some local (up Gero way) artists to probe their understandings and their stories of the cosmos. The ABC presented a lovely little show about it:
and here is some of the associated artwork