Nibiru it is Not. 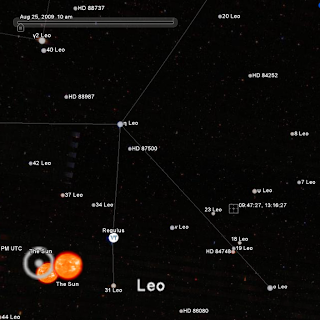 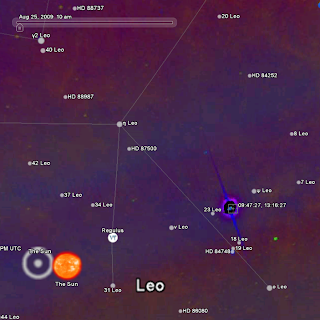 One of my readers has alerted me to an image traversing the internet that purports to be an image of the alleged doom planet Nibiru. Nibiru is a fantasy, but this object is real enough and quite interesting. If you have Google Sky (see screen shots above), crank it up, paste the coordinates 09:47:27, 13:16:27 into the location tab and Google sky will take you to an unprepossessing piece of sky near Regulus (image left). Now go to the Observatories check box and turn on the IRAS infra-red overlay and a bright, angry looking object appears (image right: you can also see it in the IR maps in World Wide Telescope).

This is what is claimed to be Nibiru in a YouTube video. But it is a far more interesting object. This is the carbon star CW Leonis (also known as IRC +10216, PK 221+45 1 and the Peanut Nebula). CW Leonis is the brightest object in the 10 μm infrared sky. The helium burning star is deeply embedded in a thick dusty envelope, so we see almost no visible radiation from it. This
remarkable animation shows the movement of hot gas in the envelope over a period of 3 years. 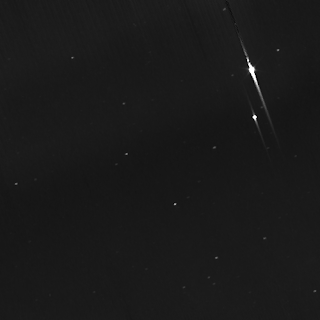 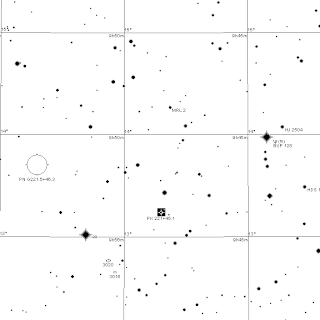 Comments:
I'm with you there Ian, that is not Nibiru.

Are you with me here? Left of the Sun at

Could be just my mind playing tricks on many ツ

I am a web page developer. I am waiting for a valid reason for that intentional hide.
It's relevance here is the population of this planet/all governments involved/Vatican. The reason for hiding can only be to alleviate the masses from panic, until even that would be too late to act upon.
One of my Union brothers said that anyone can see the planet being hidden, each morning at sunrise. His description was to left of Sun & very bright. I myself have not verified that find as of yet, Ian. I have an immensely over filled plate at the moment. I will verify this and return post on that information. I am in Memphis TN, the viewer mentioned is in Jackson,TN on a large hill in the country. His view is much less obscured of the sky, & less lights to affect as well.

"I am waiting for a valid reason for that intentional hide."
It's not very well hidden if you can see it. IRAS coverage of the sky wasn't 100%. You can see several areas where there are gaps in the IRAS image coverage. And of course, for something that moves like a planet, half coving it in one series of images isn't going to help.

"One of my Union brothers said that anyone can see the planet being hidden, each morning at sunrise. His description was to left of Sun & very bright."

That is Venus. On the 17th, the Moon will be close to it.

Venus,
Well I can have him abandon that one planet. That isn't explaining the hide though.
I spent much time on wikisky last night with their filters, interesting is the best description. Any of the online browser interactive sites will not allow viewing readily.
That hide is not Venus. It is bright enough to show through the wikisky box when viewed closeup.
Its appearance through that box looks like a really bright ball in center and 1 smaller on each side. What's being hidden there will show up soon enough, without use of these company's apps. '
Interesting to me still is I went online looking for a pull to 11:11 on the clock a lot. Ended up on the galaxy with that box, and a bad feeling on site of.

This box should not have been viewed by me. I will never rest until I know what they are hiding. If you set the filters all on and look at the historical, that area is the ONLY spot I found that shows as an edited layer. When you turn those filters off leaving only historical, it leaves the historical view. It is an added/edited area.

Oh for heavens sake! How about you do something positive. Like actually look up the catalogues of bright IRAS objects, or since you know where Nibiru is supposed to be, use the orbital solutions to work out where it should have been when the IRAS images were taken (hint, it's not in Virgo).

"Oh for heavens sake!" Like the choice of words used there Ian, I truly do.
"How about you do something positive." I did, I am, again a good choice.
"Like actually look up the catalogues of bright IRAS objects, or since you know where Nibiru is supposed to be, use the orbital solutions to work out where it should have been when the IRAS images were taken (hint, it's not in Virgo)."
I did explore many areas. I am not an astronomer. I did find much information on many subjects of concern at this exact moment in time.
That could be why I was pushed to see an error/coverup in the galaxy. I have to see/touch/smell or it didn't happen. Maybe all I had to do was start to look and other information became available because of that search. I am glad it did.

Good Luck to you Ian, and the rest of your viewers.

Ian,
I was off a little, but was just giving the coordinates I had on a 2007 google earth app. Mine was essentially center of the dark box that when zoomed shows a large sphere in center and 2 smaller on either side of it on wikisky,(google is 1/2 shown).

The location you described is not even close to center! Did you avoid the area I spoke of on purpose?

I won in horse shoes and hand grenades.

Ian, I have an issue that began my searches online for answers. It is a simple number issue. Repeating numbers of 1. Ex 11:11 started it and your PGC 49111 brought me back. Even in a space setting, you were not even close to what I gave you for coordinates.

Still Good Luck to all your viewers, they will need it.

ok.. so why are all the youtube videos being canceled?? where is it and can i see it in sky and at what times of day??? i am so sick of every time i go to find something the next day it has been shut down!!! arghh.. i just want a pic so i can see for myself.. google sky is hard for me to read being that i am not an astronomer.

why is it that every time i go to see a video on youtube or somewhere, the next day it has been shut down or blocked!! arghh!! where are the pics!!! i saw Halley's comet all over the place but not this one! why?/ where can i see it in sky and at what times of day? i need to see with my own eyes.. i am not an astronomer so google sky is hard for me to see...

bexxa said... where can i see it in sky and at what times of day? i need to see with my own eyes..

You will need at least an 8" telescope and dark skies to see it. At the moment it is in the constellation Leo, and from the northern hemisphere is visible fro about an hour before it is too low to the horizon. You can et an ephemeris from the MPEC.
http://minorplanetcenter.net/iau/MPEph/MPEph.html

infearnel that thing is saturn taking with IRAS 1983