Venus in the Daylight, on New years Eve 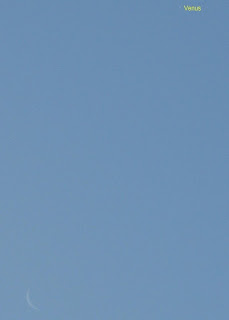 An hour before Sunset, actually (you need to click on the image and get an enlarged version to see Venus clearly).

Now, as regular readers of this blog know, I'm obsessed with seeing Venus in the daytime.

While I've been quite good at catching Venus by eye, getting images has been much harder, and using my old Olympus Mu 300, the best images I could get were around 15 minutes before Sunset. This image is taken an hour before Sunset using my newish Canon IXUS 9015, ISO 100, 1/400 second shutter speed and F 18.6 with superfine resolution. There has been no post processing except for cropping and typing the Venus caption in.

I used the Moon to locate Venus, and a corner of the house and pergola to shut out the Sun and frame the Moon Venus combination.

As I've noted before, it always seems easier to locate Venus (or Jupiter) if there is a handy foreground object nearby. This is possibly due to the contrast making the eye "floaters" less obvious and making Venus more obvious. Using a wall/roof combination really helped to make Venus obvious, and also framed the image, making them easier to find while hunting in the full scale image.

Your next good opportunity to see Venus in the daylight is on January 30th, when the Moon is 45 degrees from the Sun, magnitude -4.5 and only 2 degrees (roughly two fingerwiths) above the 15% illuminated crescent Moon. Look for the thin crescent Moon, and Venus should be visible as a bright dot just above it. It's best to look in the afternoon when the Sun is low and the sky is less bright. Make sure the Sun is hidden behind something solid like a building or a wall when you are looking for Venus, not trees or your hand. Exposing your eyes directly to the glare of the Sun can be very dangerous and you could potetially lose your sight.

If you can't wait for 30th January, locate Venus around half an hour before Sunset, and find a conveniet marker (a tree, a teephone pole or something like that) close by to Venus from a fixed postion in your yard. Note the relative position of Venus and features on the marker. Next day, go to your viewing position about 5 minutes after Sunset and note Venus's location. The next day, look 5 minutes before Sunset and note the location. And so on until you can see Venus well before Sunset. Do remember to be very careful not to look directly at the Sun when doing all of this. Chose your viewing location so that the Sun will be hidden well behind some solid object at all of your projected viewing times.

Comments:
One of the most common "UFOs" on the books. Especially around dusk. Though these days bugs, birds and dust accidentally snapped by digital cameras are gaining on it.

Me too (obsessed w/daytime sightings of Venus); which is why I'm so excited about the lunar occultation of Venus this April 22.
Have not seen one of these since 2001. Clear skies from Weyburn, Saskatchewan, Canada.
skyguy