A Stunning view of the Milky Way 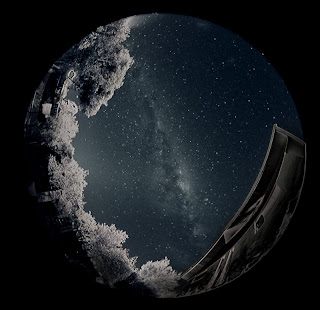 Reader Tony Travaglia sends in this remakable image of the Milky Way. He has just got a fisheye lens, manufactured especially for digital cameras that are not a full frame, and just had to try it out.

The image was taken with a Canon 300D, Sigma 4.5mm fisheye, 400ISO and 90 secs exposure at f2.8. There was some minor post processing in Photo shop, and the resulst is simply stiunning (click on the image to enlarge it).

The Great World Wide Star Count is open until November 3. So far there are only two entries from Australia up. So when you go out to watch the antics of Venus and The Moon over the next few nights, take a moment to look at Sagittarius and report to the star count folks.

Venus and the Moon, November 1. 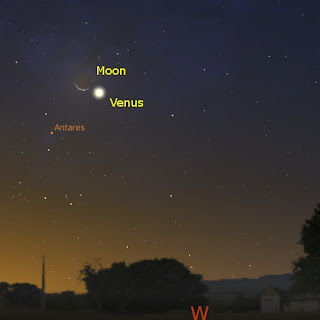 Enjoying the sight of Venus in the Scorpion? It gets better, the Moon joins Venus in the next couple of days, On the evening of the 31st of November (Friday), the Moon will be in the head of the Scorpion below Venus, and on Saturday 1 November, the Moon and Venus will be one fingerwidth apart, forming a narrow triangle with the bright red star Antares. You should be able to see this from 7:30 pm to 9:00 pm local times. Again with Jupiter up above Venus and the Moon this will be a very attractive sight.

The November edition of Southern Skywatch is now up. Venus has some beautiful encounters, ending with a close approach to Jupiter. Vesta can be seen in binoculars and the variable star Mira becomes visible to the unaided eye.

Looking Out My Window 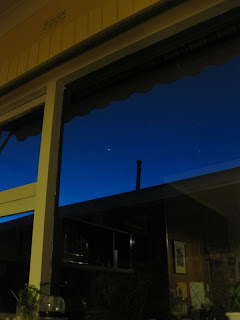 You can see amazing things in the most mundane of places. While doing the washing up I can look at flowers blooming on the vine covering the fence outside the window, watch honeyeaters flying past, or watch the stars.

The picture shows Venus as seen from my window* (you will need to click on the image and enlarge it to see Antares nearby). The experience of a sky in the outback is something to take your breath way, even from my backyard the sky is amazing, but from my window I can see great things in the slice of sky I can see while washing up.

I've watch crescent Moons chase bright planets and stars, I've watched past encounters of Venus and other planets and the current gyrations of Venus in the head of the Scorpion. Washing up can be a mundane chore, but every so often I get a skyshow to go with my dishes.

I've written before about keeping an eye out for things in our environment, and this post is another (albeit rambling) example of being familiar with the sky. You don't need an observatory in the outback to keep track of the stars, just and inquisitive eye and a nicely placed window will do.

*The bottom of the plastic drink bottle is a home made terrarium for my Venus Fly Trap, the Sundew is just out of frame. Yeah, I grow carnivorous plants.

Carnival of Space #75 is here.

Carnival of Space #75 is now up at As(si)tronomi. This is a special Swedish edition of the Carnival, being hosted by a young astronomy enthusiast in Sweden. There's the usual host of interesting posts, from x-ray satellites to harvesing asterids to robots exploring space. Go on over and have a look. 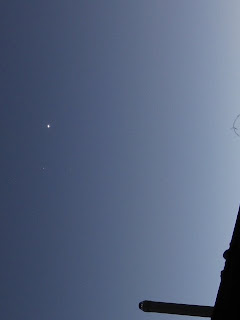 Venus shines next to Antares in the head of the Scorpion. Last nights view was obscured by clouds, but tonight was clear and fair. As always, click on the image to enlarge it (yes, I know the top one is sideways, the original is right way up, for some reason Blogger has inverted it).

Venus will be close to Antares tomorrow night as well. Then Venus will climb the Scorpion towards Jupiter, with a spectacular rendezvous coming up late November. 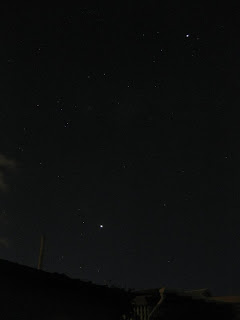 Later at night, showing Venus and Jupiter (click on the image to enlarge it, you will need to to get all the detail)

Venus is currently in the head of the Scorpion. On the evenings of the 26th to 28th of November (From Sunday to Tuesday), Venus will be very close to the bright red star Antares, you should be able to see this from 7:30 pm to 9:00 pm local times. Very worthwhile watching (with Jupiter up above the sky is quite attractive).

If you are out and about watching Venus, why not participate in the Great World Wide Star Count?
This is an annual event designed to map light pollution in the skies. All you have to do is match simple charts of stars with the sky to estimate light pollution.

The count is open until November 3, so why not have a go!

I got up at 4 am and was immediately rewarded with a bright Orionid zooming past the Pleadies, shortly after a faint one zipped up above Orion. The sky was clear, and I was able to sit where the Moon was hidden behind a tree, so the Moons glare was less of a problem. Even with the Moon I could see down to magnitude 5 easily. I watched for half an hour after the two meteors, then went back to bed without seeing anything more.

You can see some interesting images and videos of the Orionids here and here. 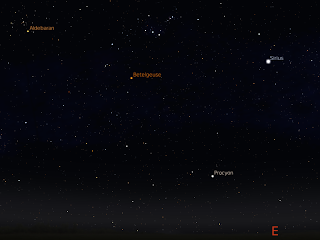 The morning sky at 2 am (daylight savings time) in Australia facing east.

The radiant is just under bright red Betelguese.

Some pictures are available at Spaceweather.

Venus in the head of the Scorpion 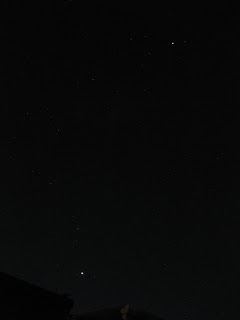 Venus and Jupiter bracket the constellation of Scorpio, the Scorpion. You will need to click on the image to see the stars in the enlarged version.

You will also note that Venus is in the head of the Scoripion, making a very interesting line-up.

Venus will now move further up the Scorpion, passing ANtares on the way. Should be an interesting few nights.

Well, Okay, so that didn't work.

So much for "posting on the weekend. Work, kids, stuff....basic life. I should be back now though.

Quiet in here, isn't it?

I've been occupied with Secret Family Business, and have had no internet access. I've missed so much (like the Mercury flyby and occultations) during this time. I'll start posting again on the weekend.