Sunrise on the Moon 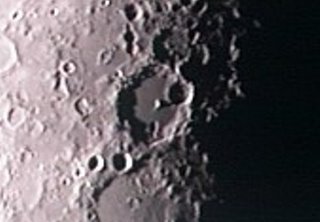 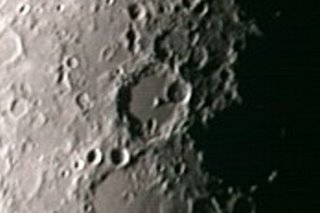 We're pretty animated here at Astroblog. First it was V838 Mon, then comet M4 Swan, then the Orionids and of course, Jupiter Mercury and the Moon. Now it's sunrise on the Moon. Before I give you the link, look at the images above. In these shots, taken 3.5 hours apart, you can see the crater shadows shrink and a crater wall light up as the Sun rises on the Moon. I was inspired to do the animation partly by the great animation fest just experienced, and partly because the Virtual Moon Atlas showed the terminator between craters Albategnius and Ptolemaeus. 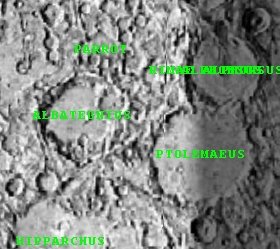 As you can see from the screen shot the terminator appeared to light up the base of Ptolamaeus (and illuminate the central peak of Arzachel (not on this image, but in the animation) at 10:15 pm local time.. So I set up the scope at 7:30 pm local time and took images approximately every 15 minutes. I say approximately, as Smallest one woke up and wandered out. "Stars Daddy" uttered next to my elbow was the first intimation that he was not tucked up in bed, so I spent another half hour cuddling him to sleep. The Oldest One woke up, too excited by his school camp the next day. So I spent another half hour putting him to bed again as well.

Anyway, I ended up with 15 frames (I finished at 11:00 pm local time, I just had to go to bed, in retrospect I should have got two more images as Arzachel is just starting to light up), which I then stacked in The Gimp. I used the central peak of Albategnius as my reference point for stacking. As I started in twilight, I couldn't properly polar align the telescope, so keeping the images aligned was a bit of a hassle, so the animation jumps around a bit. Nonetheless, I think the overall effect is quite good, you do see the shadows draw back and crater rims appear, but Ptolomaeus and Arzachel don't light up as I naively expected from VMA. Next time I'll consult the Lunar rays predictions. (Sadly, Ptolemaues rays are mostly below my local horizon until mid next year)

Without anymore ado, here is the Animation.

Comments:
i know theres no place on the moon that gets light all the time, but there are at least 2 points relativly close to ea other on the south pole that get quite a bit. could we send 2 landers and have a rover lay down a cable to connect them for continues power to ea? how hard could that be, we've landed there before and are working w/ rovers on mars now

aren't there 4 "peks of eternal light" at the north pole? I thought clemnine ruled probably. thy had been suspcted since 1837