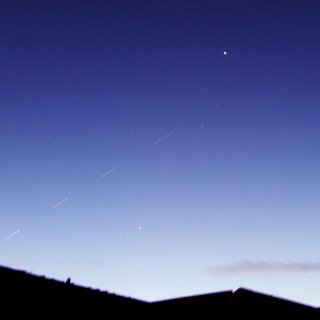 The ISS passes between Mercury (brightish dot at bottom) and Jupiter (bright dot at top) and very close to alpha Libra (dim dot about 1/3 of the way between Jupiter and Mercury). As always, click on the image to enlarge it. People with older monitors will need to do this to see anything at all). The image is a stack of five separate images in the Gimp. There is about 6 seconds delay between the images, so there are gaps in the ISS trail. The full image looks somewhat better, as it includes Scorpio as well. You can download it here (warning 1.3 Mb). I particularly like the shading of the sky. See also the animation (3 Mb)

I was idly checking if there were any current ISS passes in my area, when I found that the ISS was about to pass between Jupiter and Mercury in two minutes time! So I grabbed my camera and tripod, rushed outside and feverishly set up the camera. Just as I was ready, the ISS appeared, and I got off these shots. The ISS was a lot brighter than it appears in the image, due to the method I used for overlaying the images. This animation is much better at conveying what it is like (warning 3 Mb). After taking my shots I watched the station pass delta and alpha Ophici and on through Cygnus. A truly amazing encounter on a moments notice.