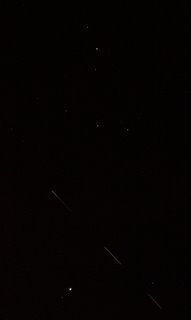 The ISS passes Beta Librae and Jupiter (as ever, click the image to enlarge it and see detail and faint stars) below Scorpius.

Wowee!! That was awesome, and I do not use the word awesome lightly. It looked like I might not get to see the pass due to errant clouds, but although the clouds lurked to the side and the horizon, I was able to see first the ISS and the the shuttle rise up from the murk rapidly brightning.

The ISS was much brighter than predicted (must be the new solar panels). The first image on the left only shows the ISS, as the shuttle was too dim for the camera (although it was more than bright enough for me to see).

The pair glided past Jupiter, looking absoultely amazing, and brightening as they went. They were probably brightest in the South West, just before reaching Trinagulum Australe. The the ISS began to fade, but the Shuttle brightened. 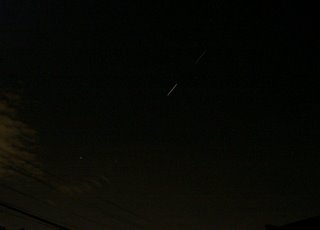 The bottom image shows the two together, you will have to click on the image to really see the shuttle (the dim trailing streak). The images do not do justice to their brightness.

I kept on thinking, "There are people on those dots". People working in space. Something I dreamed about when I was a kid, and now a reality made visible in two bright sparks chasing each other across the sky.

Comments:
Hi Ian,
Really nice shots!!!.I have a question for you.In one of your shots it shows 3 streaks...what is the 3rd one?.Is it possible that you have also captured the Soyuz rocket?????.
Give yourself a extra pat on the back if it is!!!
Andrew

No, as I said that image only has the ISS. It is a stack of 3 shots, it's all ISS with breaks in the ISS orbit while the camera cycled and got itself ready to do another shot.

Tonights ISS-Shuttle pass just got better
The Planet formerly known as Xena...
More Jupiter and Zubenelgenubi
Afternoon Delight (Mars, Mercury and the ISSS)
More STS and ISS images
Morning STS-115
Jupiter and Zubenelgenubi 2
You too can see the Space Shuttle (as a dot)
Someone got to see the partial eclipse.
SMART-1 Kicks up some dust.