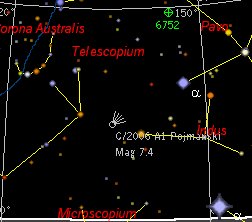 I finally got up before astronomical twilight, courtesy of Smallest One. After giving him a cuddle back to sleep, I stumbled out into the backyard with my 10x50's in search of Comet A1 Pomjanski. The comet should be around magnitude 7.5 now, and as the milky away glittered in the predawn dark, I felt confident I would find it.

Except, of course, it was in the south west, directly over the city glow. I searched in vain between alpha Indus and Iota Sagittarii. Still, the morning was beautiful, Jupiter was bright above me, Venus glitters above the roof tops, so I got my scope out for some shots of Jupiter, then went to image crescent Venus.

So that was when the cloud rolled in. Mildly miffed at natures perefidery (check the subtitle) I made a cup of tea and watched until the clouds turned red, then salmon pink with the rising sun. Then the clouds parted, and I shot off some images of Venus, then went back to bed. I didn't see the comet, but I saw more than enough beauty to make early rising worth while.

Comments:
hi i like your blog!
What is the software you used shown in the image? Thanks in advance!

G'Day Toma. Thanks! The image is a screen shot of SkyMap Pro, a very handy planetarium/almanac program.

Do you have an idea when the comet will be visible again I tried to get a photo of it but it was to cloudy where I am. So I was just wondering if you knew. I like your blog by the way

See my most recent Pojmanski post for the latest maps, it's currently not far from beta Aquilia. Weather is a bit of a problem. Most of the east coast is goinbg to be blanked out by cloud, but WA, most of SA and Vic should be fine over the weekend.

I was amazed to see Pojmanski around 1:00 am EST, 3/14/2006. So bright and clear to see, just left of Venus and passing infront of the Aquila constellation.
You see, I just began using my first telescope; so that was very exciting for me.

Theta Carina
Suit Sat lives!
UB or Not UB, that is the (planetary) question.
February's Southern Skywatch now up
Music of the Strings
A better Saturn
Semi-live Neuroscience blogging
Stormy Petrel on a Stick
What, Orion again?
Feeling the heat