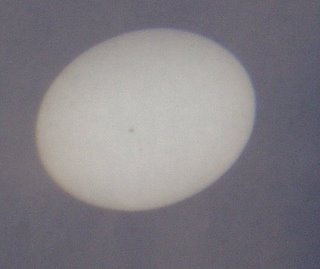 822 has been firing off more M class flares, but it is too early to tell if they will head our way and produce aurora.

Comments:
Ian (and Dave), you inspired me to get my binoculars out yesterday and try for myself. I managed to see the main sunspot and the smaller one off to the side.

Later I got a look through a PST which was even cooler. It is so much fun to change the observing wavelength with one of those.