What are you using to stack the images?

I shoot 2 second AVI’s at 30 frames per second with a QuickCam VC using Vega (gain setting 125, exposure time 3) and I use Registax 3.0.1.22 to select and stack the AVI frames. I manually remove bad frames, and use pretty plain vanilla settings for everything else (Linear wavelets, 1 step increments in layer 1 only, and I use a Lanczos filter). See the Registax 2.0 tutorial here (still applicable to Ver 3.0) 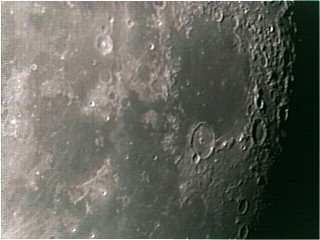 I don't know if this is specific to the Meade DSI, but they claim 50 images will get the quality to about 90%.

This is almost certainly true of the Meade DPI imager, but will depend of the quality of seeing. If seeing is not that flash, you may have to take more frames (and hand discard obviously bad frames). The lunar image to the right is a stack of 58 frames (I manually tossed two) in the original 320x120 format that the QC takes. It’s pretty good given there was a bit of turbulence about. 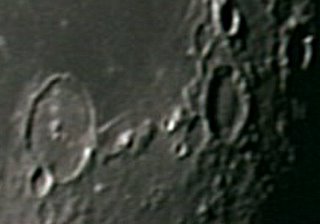 This image is a section of the above image expanded and processed in the same way as the Mars images. Still not bad but much muddier. This shows that I am pushing things to the limit with my setup.

A quick recap of stacking. Digital imaging has revolutionized astrophotography in ways we couldn’t imagine 10 years ago. With a traditional film camera, you need to expose an image for a modest length of time, bright Moonscapes don’t require much exposure time, but planetary images do require a bit of duration. During this time the atmosphere is jumping up and down and bouncing around. Your images end up looking smeared, not the crisp planetary views you see through your eyepiece. You need nights of exceptional clarity and stillness to get good images, even then you usually need to take more than one photo to get something respectable. The number of images you can take is limited by the amount of film you can afford, and at the end of the day you have one or two good images.

With digital imaging, you are limited by how much hard disk space you have. Taking 60 film shots a night is beyond my budget, but taking 600 digital images in a night is a snap. The other thing about taking multiple digital images is that you can stack them. Random noise cancels out, and the real image is reinforced. It also increases image depth, which is important in astrophotography. Stacking can produce stunning images, and with stacking amateur astronomers can produce images that were the province of professionals less than a decade ago. Of course, using an elderly webcam like I do, my pixel size is very limited compared to the newer webcams like the ToUCam. And no amount of stacking will compensate for out of focus images or poor collimation.

So how many images do you stack? The answer depends a lot on the noise in your camera. Webcams are rather noisy compared to dedicated imagers like the Meade DSI, or the Meade Lunar Planetary Imager. So you need to stack more with a webcam than a Meade imager. When conditions are bad you will need to stack more. For imaging the Moon and Jupiter, I’ve been using as few as 30 frames. The Moon images above were done with 58 frames as I said, and they look pretty cool (compare the expanded version above with Tom's Moon shot, they are not dissimilar, and have similar stacks). The Jupiter image was assembled as a stack of a mere 30 frames, the band structures are clear (and in the original you can see Jupiter’s Moons). My best Mars shot is shown at the same scale as Jupiter, and is a stack of around 45-50 frames (I had to toss quite a few, and as I said before, this was a good night). One problem is accurate registration. When the image is small and has few distinguishing features, it is harder to align then accurately. I could add on my 2x Barlow lens, but without a clock drive Mars would shoot out of frame so fast it would be hard getting any shots at all. To give you an idea of what some people will go to, this series of Mars shots was taken with an 8” SCT and represents a stack of 1200 frames per image! This amount of stacking is not untypical of the images created by QCUIAG enthusiasts.

So how much stacking? Unfortunately, you will have to experiment yourself. People with real imaging systems like the Meade DSI or LPI can go with the manufacturers recommendation. Webcam users? The more the merrier (to a limit, the QuickCam VC’s resolution is too poor for stacks of over a 100 frames to be of much use for small images like Mars).

Finally, the panel below is a comparison of images that I “just stacked” and those that I ruthlessly pruned of suspect frames. It would help if my eyesight was better. The 31/10 image improved substantially with pruning, the 31/10 image looks worse after pruning, and the other look only marginally better. Which goes to show that telescope conditions are still critical with all this fancy gadgetry.

Comments:
You might try cutting your fps to say 15, and imaging for 5-10 seconds. IMHO 2 seconds isn't really enough time for any thermal disturbances to clear the FOV, and at 30 fps you could easily catch 10-20 frames of such disturbances.

Also I've imaged Jupiter with the LPI (http://www.dirtyskies.com/wp-content/images/050506_Jptr_LPI.jpg) and when I experimented with different size stacks in post processing I found that say a stack of 200 goes a LONG way towards bringing out definition in the cloud bands where 50 did not.

I also use Registax. I agree with Rob whole heartly, more is better. Expirmentation is half the fun and I am still in that stage. Of course post processing helps out a lot and it was Rob's Jupiter image that has provided some inspiration to that end; for me it has been slow but steady progress.

It is kind of interesting how much more difficult astrophotography is compared to daytime shots. :)

Rob said... You might try cutting your fps to say 15, and imaging for 5-10 seconds.That would be a good idea, unfortunately I don't have a clock drive. Any planet is out of the frame by 4 seconds (Edge to edge of the CCD frame, hence no Barlow use).

The mount and drive for my scope is no longer maufactured, and I have yet to find a drive to fit it, but one is on my wish list (along with a toucam).

Tom wrote..It is kind of interesting how much more difficult astrophotography is compared to daytime shots. :)

Take a photo of a cute kid and no-one cars much if the definition is a little off. But the whole stacking thing blew me away. Who would have thought of it! Even in microscopy, where you are imaging really minute things under difficult conditios, you don't need stacking as the objects aren't jumping around from atmospheric noise.

Tom wrote... I also use Registax
Have you experimented with the settings much? I use a pretty vanilla set of setting, tried using non-linear waveltes but couldn't see a difference. Have tried fidling with contrast or gamma settings at all.

i used a webcam to tape the moon, but it makers wmv films, not avi, how do i set up my webcam to make avi?

My best Mars image yet!
Sunspot 822
Venus and Nunki
Good News Week
Occultation of the Pleiades
Dione and Tethys, just amazing
The Mountains of Creation
The Sun stirs again
Yes, another Mars shot
Well, it's got a rocket in it.