Did I mention it was cloudy? 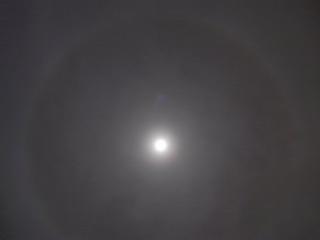 Yep, it's cloudy (there is a reason my blog is subtitled "Obscured by Clouds"). But then, most of Southern Australia seems affected by cloud. At least I got a nice shot of a Moon Bow (click to view larger version, it may be a bit murky on some monitors). Still waiting for Aurora here in Australia. Kp is 5, Solar Wind Velocity: 739 km/sec; Bz: -2.0 nT; Density = 1.0 p/cc. In Alaska the aurora are still going strong. Compare the Northern Hemisphere Aurora oval with the Southern Hemisphere aurora oval.

I found your blog by searching for solar flares and Australia and Septemebr 2005. I know nothing about astronomy but I find it all very fascinating.

I was wondering if you can tell me if the auroral storm can be seen without a telescope, and if so, where in Australia it can be seen from. I'm in Geelong.

Your blog is very interesting, by the way, even if I don't understand most of it! :)

From what I've read on this site (Ian can correct me if I'm wrong), Tasmania and southern Australia seem to get the best displays of Aurora. This makes sense when you realise that the aurora happen when energetic stuff from the sun hits our atmosphere near the magnetic poles. So, the nearer you are to a pole (north or south), the better the show you see. Just make sure you get away from the city lights (e.g. Melbourne) as the sky will be too bright to see the faint aurora.

Go check out Ians page with Australian/Tasmanian pictures of the aurora from back in August. That should give you an idea what to expect.

P.S. As I'm in the UK, I assumed you meant Geelong near Melbourne. My Australian geography isn't too hot.

Your Australian geography is spot on, by the way. Geelong is about 45mins south west of Melbourne.(And freezing at the moment, I might add.)

Judging by the pictures you directed me to, and other information I have gleaned from this site, the best time to see the lights is late at night. Is that correct?

Also, can solar flares directed at earth cause dramatic changes in weather? This is something I have been thinking about.

Thanks again for your help.

Yes. Late at night is best. I think (I may very well be wrong) that the particles from the sun (and so the aurora) tend to end up mainly on the opposite side of the pole to the direction of the sun. Basically that means late at night. It also helps that it is dark then, so you can see it ;-)

I'm not aware of aurora having any great impact on our weather. It is probably unlikely though, as the aurora occur about 100 to 250km above the surface. That puts them way above the region that we would associate weather with e.g. even huge storms only get to about 10-20 km high.

To put the height of aurora in perspective, the boundary with space is defined (by most people) as 100 km and the International Space Station orbits about 350 km to 460 km above the surface.

Although I think it unlikely that they affect our weather, they do affect telecommunications. Firstly, they can 'zap' the circuits in satellites and as such the satellites are usually turned away from the sun during times of activity. Particularly strong activity can also affect the ground though. The most famous example is when the powergrid over Canada and the eastern US was knocked out a few years ago.

If you go out to look, wrap up warm!

Stuart has covered most of the issues, so I'll just wish you the best in aurora spotting, as I have to rush to work. Any further questions and we will be happy to answer.

Ian, is your cloud situation historically typical or is it just a "bad" pattern you are stuck in?

It is a bad pattern. Normally, what is laughingly called a wet season here is in winter (it is mostly cloud plus a bit of drizzle, this being the direst capital city in Australia, on the edge of a honking great desert). In the past few years we have been in drought, although this gives us a few more clear nights, it is not so hot in terms of agriculture or water supply. For some reason drought-breaking rains are turning up in Spring (when they should have been in Winter). Good rain is okay, but it could have come earlier.

Hopefully it will be clear for the occultation of the Pleiades.

Waiting for Aurora
X Class Flare CME now expected to arrive Thursday 15
More X Class flares
The Moons of Mars
More Sunspot 798 and the Grunaiad on Sicence
Kp still at 6, clouds still about. (10:00 pm ACST)
Kp at 6 still
Monday Night Aurora Blogging
Kp up to 6
Kp down to 5 (still 7 in Vic and Tas)