The First Quarter Moon is Wednesday, June 8. Five bright planets are visible in a line in the morning sky by mid-week. Saturn, Mars, Venus, Jupiter and Mercury. Jupiter is climbing higher in the sky leaving Mars and Venus behind.  Uranus is a binocular object and is approached by Venus. Mercury is low in the morning twilight.

The First Quarter Moon is Wednesday, June 8.  The Moon is at apogee, when it is furthest from the Earth, on June 2. 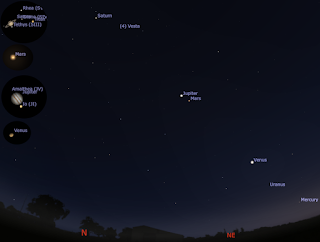 Morning sky on Saturday June 4 as seen from Adelaide at 6:17 am ACST (690 minutes before sunrise). Saturn, Jupiter, Mars, Venus and Mercury form a line (Uranus, Neptune and the Asteroid Vesta are in the line too, but all need at least binoculars to see) . 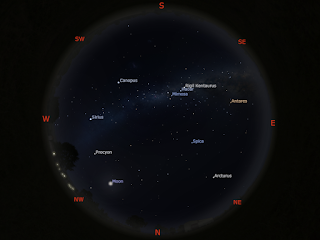 Whole sky on Saturday, June 4, 18:41 ACST, 90 minutes after sunset (click to embiggen). Orion can be seen just above the western horizon. As Orion sinks Scorpius rises above the Eastern horizon. Between the bright star Canopus and the Southern Cross are a wealth of binocular objects to discover.

Mercury is low in the morning twilight.