The First Quarter Moon is Saturday, December 11.  Three bright planets are seen forming a line in the early evening sky. Venus forms a line with Saturn and Jupiter  in the western evening sky with Jupiter dominating once Venus has set. The crescent Moon has been climbing the ladder of planets and is closest to Jupiter on the 9th. Geminid meteor shower peaks morning 14 December. Comet C/2021 A1 Leonard may be visible on the 16th. 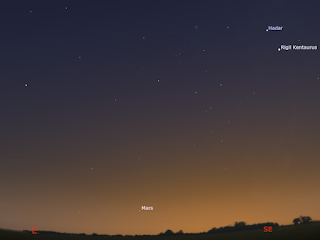 Morning sky on December 11 looking east as seen from Adelaide at 5:10 ACDST (45 minutes before sunrise). Mars is low in the twilight, you may need binoculars to see Mars clearly.

Similar views will be seen throughout Australia at the equivalent local time (45 minutes before sunrise, click to embiggen). 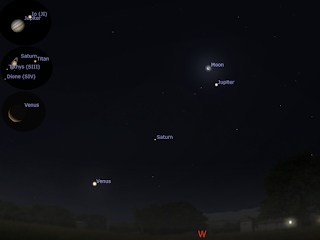 Evening sky on December 9 looking west as seen from Adelaide at 22:07 ACDST (90 minutes after sunset).  Venus forms a line with Saturn and Jupiter. The waxing Moon is within binocular range of Jupiter

The insets shows the telescopic views of Venus, Saturn and Jupiter at this time. Venus is a distinct crescent now. Similar views will be seen throughout Australia at the equivalent local time (90 minutes after sunset, click to embiggen). 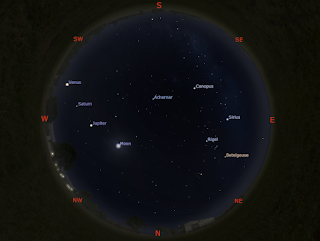 Whole sky showing the Moon, Jupiter, Saturn and Venus in a line , December 11, 22:07 ACDST, 90 minutes after sunset (click to embiggen). Orion, Taurus and the Pleiades can be seen above the eastern horizon. 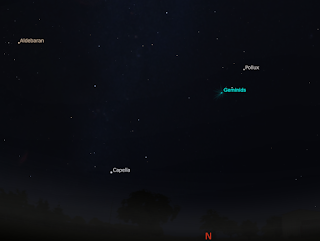 Geminid radiant seen facing north from Brisbane at 2:00 am AEST, December 14.The radiant is marked with a starburst (click to embiggen).

The Geminids are a fairly reliable meteor shower, with rates of about a meteor per minute at their best. This is a good year for Geminids, as the waxing Moon sets before the best rates..

The Geminids have a broad peak and will normally show good activity well before and after the peak, and on the day before and after. Australians should see a meteor every 2-3 minutes under dark skies in the early morning of the 14th, between 2:00 am and 4:00 am. for more details see my Geminid 2021 page. 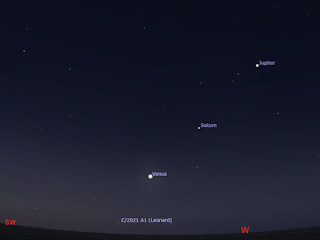 Comet C/2021 A1 Leonard as seen looking west from Adelaide at 21:32 ACDST (60 minutes after sunset) on 16 December. Similar views will be seen in elsewhere in Australia 60 minutes after sunset. Comet C/2021 A1 (Leonard) is this years “Christmas comet”. While not as spectacular as the “searchlight comet” Comet C/2011 W3 Lovejoy, it will be a nice little binocular object. It is predicted to reach magnitude 4 at its brightest but it will be too close to the sun to see, the earliest we can expect to see it in the southern hemisphere is around the 16th, low in the twilight. As it climbs higher we will get better views but it will fade rapidly.

Venus is visible in the early evening when the sky is fully dark.  I have been able to see Venus from just after sunset and it is easily seen over 3 hours after sunset, longer if you have a clear western horizon.  Venus is at its greatest brilliance, forming a line with Saturn and Jupiter. It is now a distinct crescent in even small telescopes.