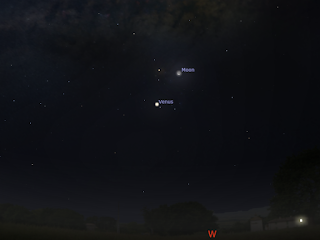 Western evening sky on Sunday, October 10, at 20:52 ACDT, 90 minutes after sunset showing showing Venus near delta Scorpii forming a triangle with the crescent Moon and the bright star Antares.

This month the planetary action remains mostly in the evening skies, with 4 bright planets visible after the sky is fully dark in the first week, with the pair of Venus and Mercury in the east and the pair of Saturn and Jupiter in the west. Mercury is then lost to view but the remaining three bight planets dominate the sky. The Moon meets bright Venus and forms a triangle with the bright star Antares, then later Venus is close to Antares.  The Orionid meteor Shower is washed out by the bright full Moon.

Mercury is visible in the early evening in the first week of this month. It is then rapidly lost to view and returns to the morning sky, but never really gets out of the twilight. On the 1st Mercury is just under a hand-span from the western horizon an hour after sunset, just above Spica and below Venus. by the 15th Mercury lost in the twilight in the morning sky.  By the 30th Mercury is just under a two finger-widths from the eastern horizon an half and hour before sunrise.

Venus is easily visible in the evening sky from 30 minutes after sunset (I can see it as early as 5 minutes after sunset) until well after the sky is fully dark. Mercury, Venus and Spica make a nice line in the late evening twilight in the first week of October, before Mercury and Spica vanish in the twilight. At astronomical twilight, we can enjoy the sight the sight of bright Venus in the west and bright Jupiter in the north. Venus dominates the evening twilight as it climb the Scorpion,comes closer to, and then passing, first Delta Scorpii then the bright star Antares. Venus now a distinct "Half Moon" shape. Overall, in the early part of the Month, the sight of Venus below the reversed question mark of Scorpius will be very attractive. If you have an ocean or lake horizon, try to catch the reflection of Venus and Scorpius in the water (if its still). On the 9th and 10th thin crescent Moon brackets Venus. On the 10th Venus, the Moon and Antares form an attractive triangle. On the 9th Venus is one degree (a finger width) from Delta Scorpii in the head of the scorpion. The pair fit into the field of view of a 10x50 binoculars. Venus continues passing through Scorpio heading towards the bright star Antares. Venus is closest to Antares on the 16th and 17th (about one and a half finger widths) and will fit into the FOV of 10x50 binoculars. Venus continues to climb Scorpius (although technically it enters Ophiuchus in the latter part of the month) and is close to the globular cluster M19 on the 23rd-24th (binocular or telescope only, bright Venus may drown out the light of the dimmer M19).

Mars is lost in the twilight

Jupiter is readily visible from astronomical twilight and continues to climb into the evening sky. Jupiter was at opposition, when it was biggest and brightest as seen from Earth, on August 19th, but is still bright and an excellent object in even small telescopes. This month at astronomical twilight, we can enjoy the sight the sight of bright Venus in the west mirroring bright Jupiter in the north. Once Venus has set Jupiter dominates the night sky. On the 13th the waxing moon forms a line with Saturn and Jupiter. On the 15th the waxing moon is close to Jupiter and the pair fit into the FOV of 10x50 binoculars. Then on the 16th the waxing moon again forms a line with Jupiter and Saturn. Telescopically Jupiter will be best evening to the early morning when it is highest above the northern horizon.

Saturn can be easily seen from astronomical twilight (an hour and a half after sunset) during October. Saturn was at Opposition, when it was biggest and brightest as seen from Earth, on the 2nd of August. However it will remain great viewing for many weeks to come. On the 13th the waxing moon forms a line with Saturn and Jupiter. On the 14th the waxing moon is close to Saturn and the pair fit into the FOV of 10x50 binoculars. Then on the 16th the waxing moon again forms a line with Jupiter and Saturn. Telescopically Saturn will be best from astronomical twilight to midnight when it is highest above the northern horizon. At the beginning of the month Saturn should be best for scopes around 8:30 pm local time (it will be good before then, but it is better when it is highest and in still air and twilight is encroaching).