The Full Moon is Saturday, July 24.  Mercury is lost to view. Venus is readily visible in the evening twilight and is leaving Mars behind as it approaches the bright star Regulus. Venus is closest to Regulus on the 22nd. Saturn and Jupiter are visible late in the evening sky and are visited by the Moon on the 24th-26th. Southern Delta Aquarids meteor shower peaks 29th-30th.

The Full Moon is Saturday, July 24. 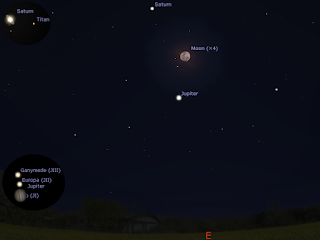 Evening sky on Sunday, July 25 showing the eastern sky as seen from Adelaide at 22:00 pm ACST. Saturn and Jupiter form a line in the late evening sky with the Moon between Saturn and Jupiter.
The insets shows the telescopic views of Jupiter and Saturn at this time.
Similar views will be seen elsewhere in Australia at the equivalent local time, click to embiggen. 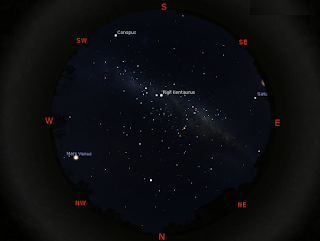 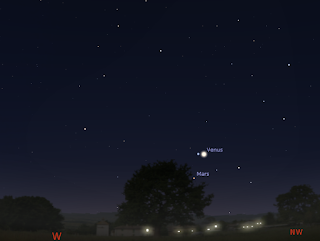 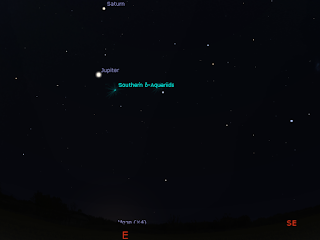 Evening sky looking east from Adelaide at 11 pm local time in South Australia. The starburst marks the radiant  (the point where the meteors appear to originate from) of the Southern Delta Aquariids. Similar views will be seen elsewhere at the equivalent local time (click to embiggen).

The Southern Delta-Aquarids meteor shower runs from from 12 July to 23rd August, peaking on Thurday July 29 to 30. The number of meteors you will see depends on how high the radiant is above the horizon, and how dark your sky is. This shower is fairly faint, with the highest rate of around a meteor every 7 minutes. This year the shower occurs when the Moon is close to the radiant so lower rates will be seen than usual.

At 11 pm, face east, and look  towards Jupiter (the brightest object above the eastern horizon). The radiant is just below Jupiter. This meteor shower should be visible from 10.00 pm until dawn. However, after Moon rise the rates will fall off considerably.