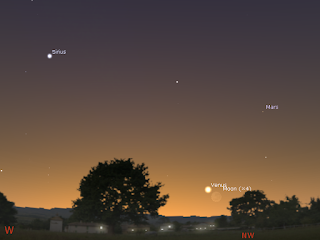 Evening sky on Saturday, June 12 showing the western sky as seen from Adelaide at 17:39 ACST (30 minutes after sunset). Venus is close to the crescent Moon.

(similar views will be seen Australia wide at the equivalent local time, 30 minutes after sunset) click to embiggen.

This month the planetary action is mostly in the evening skies, Saturn and Jupiter are now readily visible in the late evening skies, Venus becomes easier to see, the Earth is at solstice and fading Mars crosses the beehive cluster.

Mercury Mercury returns to the morning twilight by mid-month. However, it is only visible in the last week of June, below the bright red star Aldebaran.

Mars  is low above the western horizon, best seen an hour to an hour and a half after sunset. Mars starts in Gemini this month then moves into cancer. On the 1st Mars forms a line with the bright “twins” Pollux and Castor. Mars is then bracketed by the crescent Moon on the 13th and 14th by about a hand-span. On the 23rd and 24th Mars passes directly over the Beehive cluster

Jupiter Jupiter is readily visible around midnight and continues to climb in to the late evening sky. On the 1st Jupiter is a handspan from the waning Moon, and again on the 28th.