The Night of the Wednesday, May 26 was the night of first total lunar eclipse in Australia since 2018. This was also a perigee Moon.

It was of course cloudy, but intermittent cloud that allowed a view of the Moon. I set up both telescopes set up (the 8" Newtonian with tracking and the 4" Newtonian non-tracking). And friends and neighbors, as well as the family joined me in the cold to watch to progress of the eclipse. Beers and hot tea and coffee circulated as the glowing sliver of Moon diminished ad the reddish earth shine began to dominate.

The images taken here were using  Xperia Mobile phone attached to  25 mm Plossl lens on the 8" guided scope.  Exposure ranged fro ISO-200 for 1/4000 second to iso 1600 and 1 second depending of eclipse depth and cloud cover.

We got to see totality in all its glory through thin cloud, then the cloud thickened and everyone went home. Well except me, as I was home, but I had another cuppa and waited to see if the cloud cleared.

It did and I was able to get more shots in before the cloud finally won and the drizzle started, with the resultant dash to get the scopes under cover. All in all an excellent eclipse.

The entire eclipse sequence as one image

Below is  animation of the eclipse sequence, a little wobbly but rather nice.


Unexpected occultation of of the 6.4 magnitude star HIP 79788. Normally a full moon would be too bright to see the occultation of the relatively dim star, but this turned out to be quite easy to follow. 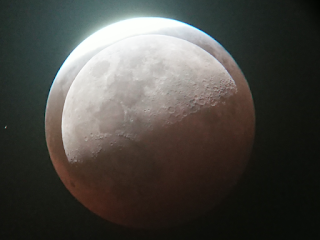 Overlay of the May 26 perigee Moon with January 21 apogee First Quarter Moon. The size difference is clear in telescope images. (click to embiggen) 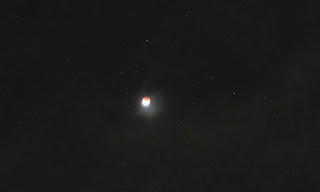 The sky was too cloudy to get the surrounding stars during totality, but in a break in the cloud post totality I was able to get the Moon against the stars of Scorpius. ISO 1600, 1 second exposure(click to embiggen and to see the dimer stars more easily.)