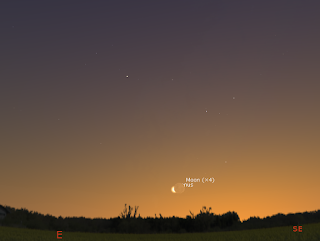 Morning sky on Tuesday, January 12 showing the eastern sky as seen from Adelaide  at 5:46 am ACDST (30 minutes before sunrise). Venus is getting lower to the horizon and is less than a finger-width from the thin crescent Moon. You will need a level, unobstructed horizon to see this.  Similar views will be seen elsewhere in Australia at the equivalent local time (30 minutes before sunrise), click to embiggen.

In January most of the planetary action is low in the twilight.

Mercury is difficult to see low in the evening twilight. It is close to the Moon on the 14th, with Jupiter below.

Venus is close to the crescent Moon on the 12th low in the morning twilight..

Mars is close to the Moon on the 21st, with Uranus in between

Saturn is lost to view early in the month.