This year sees three penumbral lunar eclipses, unfortunately, they are all very poor. On the morning Saturday, June 6 the second of these eclipses will occur. This is a relatively poor penumbral eclipse, but most of Australia gets to see mid-eclipse under fairly dark conditions. The subtle darkening of the Moon as it passes through Earth's shadow may be hard to distinguish (see here for January's better penumbral eclipse). 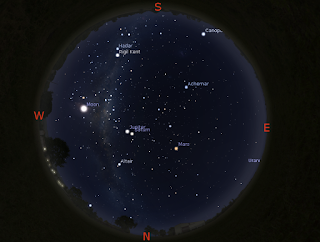 Morning sky on Saturday, June 6 showing the whole sky as seen from Adelaide at 4:55 am ACST (maximum eclipse depth). Three bright planets are visible high above the northern horizon with the eclipsed Moon below the pair of Jupiter and Saturn. Similar views will be seen elsewhere at the equivalent local time click to embiggen.

Unfortunately, like the January 11 eclipse the June 6 eclipse occurs in the early morning. Even though it is on a Saturday you may wish to stay in bed for this one.

However, the sky itself, with the line-up of Moon, Jupiter, Saturn and Mars will be beautiful, along with the Milky Way. There may even be satellite or two and a meteor, so if you do get up the sky will not disappoint.

You don't need special filters or fancy equipment to watch the lunar eclipse, you just need your eyes and somewhere comfortable to sit and watch. Watching the faint outer shadow of earth creep across the Moons face is quite challenging, as the darkening is subtle. The Moon is very obvious to the west.

In a penumbral eclipse, the Moon only enters the outer part of Earth's shadow. This will results in a subtle darkening of the Moons southern half. Depending on how good your eyesight is, it could be reasonably visible, or only visible via photography.


A guide I wrote for the October 2014 lunar eclipse about taking photos of the eclipse is here.

On the East coast, the eclipse starts when the sky is quite dark at 3:43 am AEST and mid-eclipse is at 5:25 am, at astronomical twilight when the Moon is reasonably high. The eclipse finishes after Moon set.

In the central states, the eclipse starts at 2:36 am ACST and mid-eclipse begins well before astronomical twilight at 4:55 am ACST, the eclipse end occurs at dawn.

For other regions, see here for UT timings.