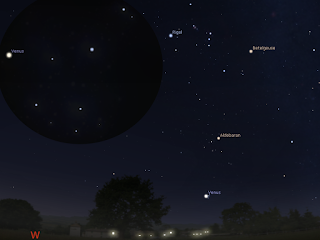 
The April edition of Southern Skywatch is now up.

Saturn and Mars close 1 April. Venus in the Pleiades 3-4 April. Perigee Syzygy "super" Moon on April 8. Until around mid-month four bright planets will be seen in the morning sky, the moon traces down this ladder of planets, with an excellent massing on the 16th.

Mercury is an excellent in the morning sky until mid month , then is rapidly lost in the twilight.

Venus is high in the evening sky. It passes through the Pleiades 3-4 April. Venus is visited by the crescent Moon on the 26-27th and is at its greatest brilliance on the 28th.

Mars comes close to Saturn on the 1st.

Saturn   climbs higher in the morning sky and is close to Mars on the 1st.