The  New Moon is Monday, February 24. Venus is prominent in the evening sky well after twilight and is joined by the crescent Moon on the 27th. Three bright planets are now visible in the morning skies. Mars is moving through the heart of the Milky Way. Mars leaves behind the Lagoon and Triffid Nebulae and heads towards the globular cluster M22. Jupiter is visible below Mars and above Saturn. The Moon is spectacularly close to Jupiter on the 20th and close to Saturn on the 21st. The Red Giant star Betelgeuse in Orion is still dim but may brighten.

The  New Moon is Monday, February 24.Apogee, when the Moon is furthest from the Earth, is on the 26th. 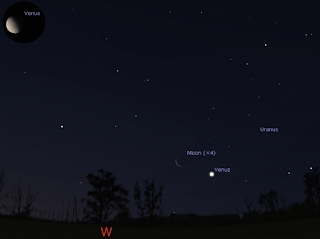 Sky at 20:52 ACDST on Thursday, February 27 (60 minutes after sunset) looking west as seen from Adelaide. Venus is prominent in the sky close to the thin crescent Moon. The inset shows the telescopic view of Venus at this time. 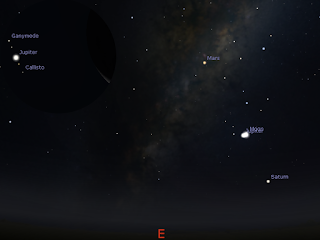 Morning sky at 5:00 ACDST facing east as seen from Adelaide on Thursday, February 20, .


Jupiter is well above the horizon and Saturn appears below it. The Moon is spectacularly close to Jupiter (less than half a finger-width, and the pair are easily visible together in binoculars or wide field telescope eyepieces. The inset is the wide field view at 5:00 AM ACDST, when Jupiter and the Moon are closest 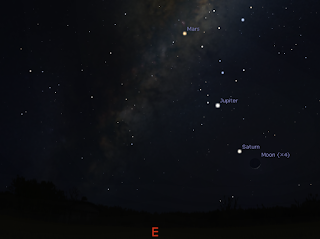 Morning sky at 5:25 ACDST facing east as seen from Adelaide on Friday, February 21, 60 minutes before sunrise.

Three bright planets now dominate the morning skies. Mars is well above the horizon. Mars is in some interesting binocular territory as it crosses the milky way closing in on Jupiter.

On the 21st the Moon is close to Saturn ending the Moons visit to these bright planets with a glorious sight. 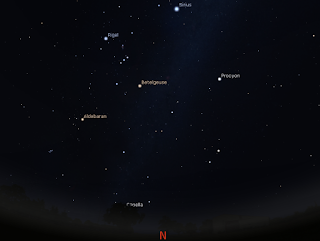 Evening sky looking north at 20:53 ACDST on Saturday, February 22 (90 minutes after sunset). Similar views will be seen elsewhere in Australia at the equivalent local time. Orion is readily visible. Betelgeuse is the bright red star below the "saucepan" of Orion. Red Aldebaran is almost the same height above the horizon as red Betelgeuse, making brightness comparisons easy.

It is suggested that Betelgeuse may begin brightening again soon, so keep watching this iconic star.

Betelgeuse has dimmed substantially and is now reportedly around magnitude 1.6, it is visibly dimmer than magnitude 1 Aldebaran and roughly as bright as Bellatrix. The next brightest star just to the north of Betelgeuse. Keep an eye on this historic dimming event, observing hints and stars for magnitude estimation are given here. The waning nd new moon will not interfere with estimates of  Betelgeuses' brightness during the week. Betelgeuse may start brightening again around the 21st.

Venus is prominent above the western horizon in the early evening sky. Venus is now readily seen up to 90 minutes after sunset.Venus is visited by the Moon on the 27th.

Mars is visible high in the morning twilight. Mars leaves the Triffid and lagoon Nebulaeheading for the globular cluster M22 and Jupiter.

Jupiter climbs higher in the morning sky. The Moon is spectacularly close to Jupiter (less than half a finger-width apart) on the 20th and the pair are easily visible together in binoculars or wide field telescope eyepieces.

Saturn climbs higher in the morning twilight and is visited by the Moon on the 21st.