The Sky This Week - Thursday December 26 to Thursday January 2

The  New Moon is Thursday, December 26.  Venus climbs even higher in the evening sky. Venus is close to the crescent Moon the 29th. Mars is visible in the morning twilight.

The New Moon is Thursday, December 26. The Moon is at apogee when it is furthest from the Earth on January the 2nd 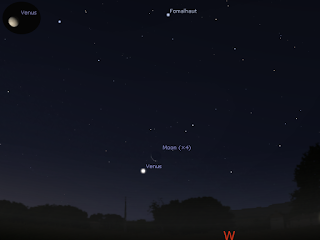 Sky at 21:38 ACDST on Sunday, December 29 (60 minutes after sunset) looking west as seen from Adelaide. Venus is just below the crescent Moon.


The left upper insert shows the telescopic view of  Venus at this time. It is a distinct gibbous shape. 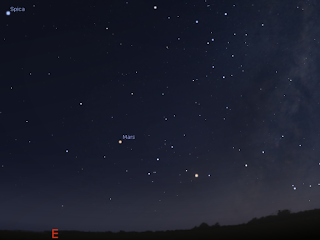 Morning sky at 4:56 ACDST facing east as seen from Adelaide on Saturday 28 December 60 minutes before sunrise.

Mars is low above the horizon

Venus is higher above the western horizon in the early evening sky. Venus is now readily seen up to 90 minutes after sunset. Venus is close to the crescent Moon on the 29th.

Mars is visible in the morning twilight.

Saturn  is  lost in the twilight.