The  Last Quarter Moon is Thursday December 19, the New Moon is Thursday December 26.  Venus climbs even higher in the evening sky. Saturn is low in the twilight below Venus and is lost to view by the end of the week.  Jupiter is lost in the evening twilight.  Mars is visible in the morning twilight and is close to the crescent Moon on the 23rd and 24th. Bright star Betelgeuse dims further. 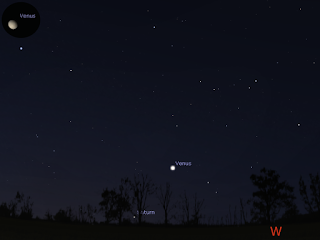 Sky at 21:35 ACDST on Saturday December 21 (60 minutes after sunset) looking west as seen from Adelaide. Venus is above Saturn which is just above the horizon.


The left upper insert shows the telescopic view of  Venus at this time.It is a distinct gibbous shape. 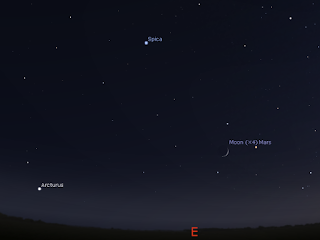 Morning sky at 4:53 ACDST facing east as seen from Adelaide on Monday 23 December 60 minutes before sunrise.

Mars is low above the horizon Near the thin cresent Moon. Mercury is lost in the twilight. 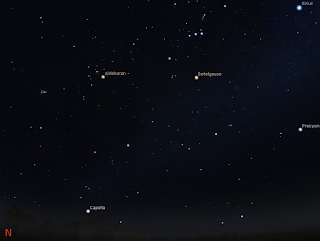 Evening sky looking north-east at 23:00 ACDST on Saturday December 21. Similar views will be seen elsewhere in Australia at the equivalent local time. Orion is readily visible. Betelgeuse is the bright red star below the "saucepan" of Orion. Red Aldebaran is almost the same height above the horizon as red Betelgeuse, making comparison easy.

However Betelgeuse has dimmed substantially, and is now even dimmer than last week, reportedly around magnitude 1.3, it is visibly dimmer than magnitude 1 Aldebaran. It is well worth keeping an eye on it, to see if it dims further. What the dimming means is not clear, but Betelgeuse will be an interesting object over the coming month.

Venus is higher above the western horizon in the early evening sky. Venus is now readily seen up to 90 minutes after sunset.Venus leaves Saturn further behind over the week.

Mars is visible in the morning twilight. it is close to the crescent Moon on the 23rd and 24th.

Saturn  is below Venus close to the horizon and is lost in the twilight by the end of the week.