The New Moon is Wednesday November 27.  Venus climbs higher in the evening twilight closing in on Jupiter with the pair closest on the 24th. Jupiter is easily visible low in the western evening skies near  Venus. The crescent Moon is close to Jupiter on the 28th. Saturn is above Jupiter and Venus, higher in the western evening skies.  Asteroid Vesta visible in binoculars. Alpha Monocerotids meteor shower 21st-22nd. Mars and Mercury close to the crescent Moon 24th-25th

The New Moon is Wednesday November 27. The Moon is at perigee, when it is closest to the Earth, on the 23rd. 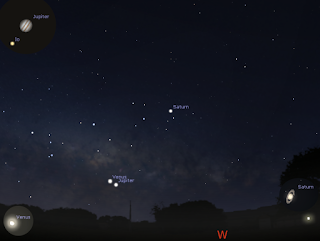 Sky at 21:11 ACDST on Sunday 24 November (60 minutes after sunset) looking west as seen from Adelaide. Venus and Jupiter are at their closest with Saturn above the pair. 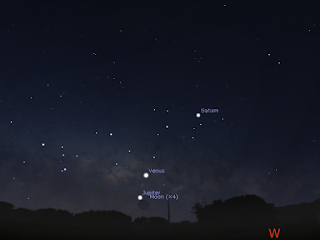 Sky at 21:15 ACDST on Thursday 28 November (60 minutes after sunset) looking west as seen from Adelaide. The crescent Moon  and Jupiter are close with Venus and Saturn above the pair. 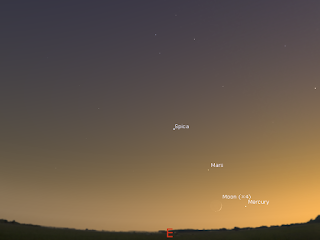 Morning sky at 5:29 ACDST facing east as seen from Adelaide on Sunday 24 November 30 minutes before sunrise.

Mars is low above the horizon just below Spica near the crescent Moon and Mercury. You may need binoculars to see Mercury. 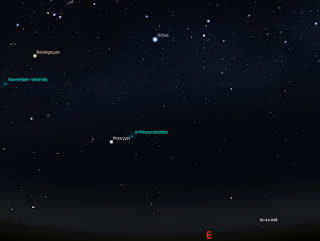 Morning sky facing north-east from Adelaide at 1:00 am ACDST on 21 November, the alpha Monocerotids radiant is indicated with a star burst. Similar views will be seen elsewhere in Australia at the equivalent local time.

The alpha Monocerotids are normally inconspicuous from Australia. But this year there is the prediction of an outburst of up to 400 meteors per hour around 04:50 UT (around 3 pm). While this is during daylight hours for us, it is possible the peak may arrive early or late so observations on the morning of the 21st and 22nd from around 1 am are encouraged.

Venus is higher above the western horizon in the late evening twilight. Venus is now readily seen up to 90 minutes after sunset.Venus comes closer to Jupiter over the week and is closest to it on the 24th, before leaving Jupiter behind.

Mercury is climbing out of  the twilight.

Jupiter   is easily visible in the western sky  and is located beside the distinctive tail of the constellation of Scorpius and above Venus. Venus comes closer to Jupiter over the week and is closest to it on the 24th, before leaving Jupiter behind. The thin crescent Moon is close to Jupiter on the 28th.

Saturn  is above Jupiter and Venus and near the "handle" of the "teapot of Sagittarius. It is best for telescopic viewing from just around astronomical twilight local time until around 10:00 pm.