The  Perseid meteor shower is a reliable and good northern hemisphere shower, and hundreds of meteors may be seen under the very best condition, this year the rates will be around usual, nice but not spectacular. From Australia though things will be a bit disappointing.

This is a poor year, the peak occurs after sunrise in Australia, and is over well before radiant maximum height, this years peak is about usual (with a ZHR of 110 meteors per hour predicted) but the Moon is near full and will significantly interfere. 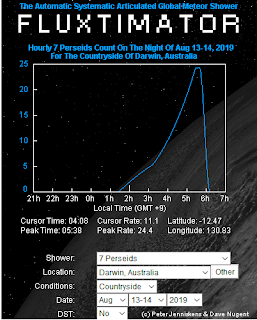 You can check predictions for your local area at the NASA meteor flux estimator (choose 7 Perseids and 12-13 or 13-14 August 2019). Unfortunately, both Chrome and Firefox have changed their security settings to prevent plugins from running, and the flux estimator only runs under Internet Explorer now.


Rates on the morning of the 15th are lower that of the 12th. Note, those of you who have Stellarium, in version 13 they have added meteor shower radiants (rates set in the planets dialogue, F4). However while the radiants are shown, the simulated meteors come from random points in the sky, not the radiants.