The Full Moon is Wednesday, July 17. There is a partial lunar eclipse on the morning of the 17th. Mars is visible low in the evening twilight with Mercury below it briefly before Mercury vanishes in the twilight.  Jupiter is easily visible as the brightest object in the evening skies and is visited by the Moon on the 13th. Saturn, just past opposition, is high in the late evening skies and is visted by the Moon on the 16th.  Venus is lost in the twilight glow.

The Full Moon is Wednesday, July 17. There is a partial lunar eclipse on the morning of the 17th. 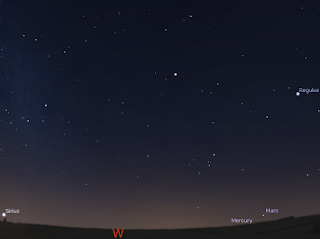 Evening sky on Saturday, July 13  as seen looking north-west from Adelaide at 18:20 ACST (60 minutes after sunset). Mars is close to the horizon. Mercury is lost in the twilight. 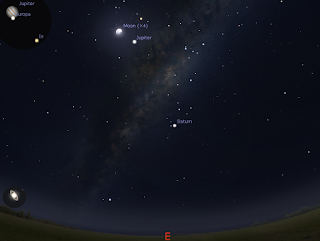 Sky at 20:00 ACST on Saturday, July 13 looking east as seen from Adelaide. Jupiter is past opposition, and high above the eastern horizon with the Moon nearby. Saturn is below the pair and just past opposition. 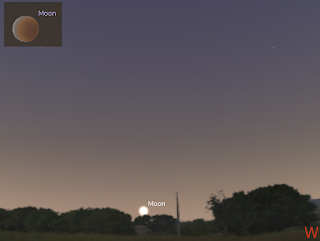 Morning sky on July 17 looking east as seen from Adelaide at 07:00 ACST, at maximum eclipse. Similar views will be seen elsewhere in Australia at the equivalent local time. (click to embiggen). The darkening of the Moon will be readily visible.

Jupiter  Jupiter is now well past opposition. However, it is still well worth observing. Jupiter is easily visible as the brightest object in the north-eastern/northern sky (aside from the Moon) and is located just below the distinctive constellation of Scorpius and the bright red star Antares. It is visible all evening long and is a good telescope target in the evening, being highest above the northern horizon around 10:00 pm local time.The Moon is close to Jupiter on the 13th

Mars is in Cancer and very close to the horizon.