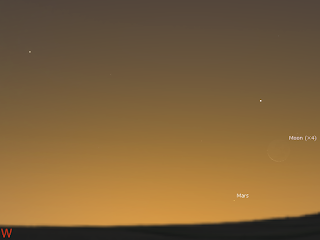 Evening sky on Friday, August 2 as seen looking north-west from Adelaide at 18:02 ACST (30 minutes after sunset). Mars is close to the horizon with the thin crescent Moon close by. You will need a clear level horizon and binoculars to see Mars, using the Moon as a signpost. 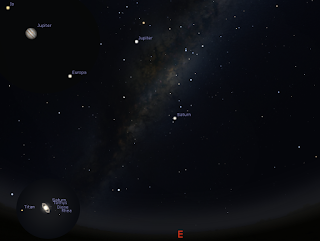 Sky at 19:02 ACST (90 minutes after sunset) on Saturday, August 3 looking east as seen from Adelaide. Jupiter is past opposition, and high above the eastern horizon. Saturn is below and just past opposition. 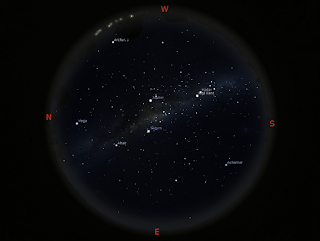 The whole sky at 22:00 ACST on Saturday, August 3 as seen from Adelaide. The Southern Cross is beginning to leave the zenith. However, the galactic core (and the celestial emu) is at the zenith and there are numerous clusters and nebula high in the sky in the tail of the Scorpion and the lid of the teapot of Sagittarius  that will be a delight to explore while the Moon is new.

Jupiter Jupiter is now well past opposition. However, it is still well worth observing. Jupiter is easily visible as the brightest object in the north-eastern/northern sky (aside from the Moon) and is located just below the distinctive constellation of Scorpius and the bright red star Antares. It is visible all evening long and is a good telescope target in the evening, being highest above the northern horizon around 8:30 pm local time.

Mars is lost in the twilight. However, on the 2nd it is close to the thin crescent moon, and those with a clear level horizon can spot it in binoculars.

Saturn was at opposition on July 10th, when it was visible all night long. Saturn is below Jupiter and just below the "handle" of the "teapot of Sagittarius. It is best for telescopic viewing from just around 9 pm local time until the early morning and is highest above the northern horizon when it is ideal for telescopic imaging, around 10:30 pm local time.