Southern Skywatch May 2019 edition is now out! 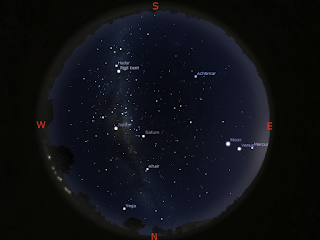 Morning  sky on Thursday, May 2 looking east as seen from Adelaide at 5:56 ACST (60 minutes before sunrise).  Four bright planets can be seen. Jupiter and Saturn are high above the northern horizon. Venus and Mercury are close with the thin crescent Moon above Venus, making an attractive line-up.


The May edition of Southern Skywatch is now up.

May 6-9 Eta Aquariid meteor shower in the early morning.

Mercury lowers in the morning sky and will be lost to view mid month. Mercury is close to the crescent Moon on the 3rd, forming a triangle with Venus..

Venus is low in the morning skies and is close to the crescent Moon on the 2nd.

Jupiter is close to waning Moon on the 20th.

Mars is close to the crescent Moon on the 8th.

Saturn climbs higher in the morning sky and enters the evening sky late in the month. April 23; waning Moon close to Saturn.