The Moon facing east at 22:54 am ACST in Adelaide on Thursday 25 April just as Saturn appears from behind the Moon. The Moon is a hand-span from the horizon.

A reminder that there is an occultation of Saturn that can be seen from most of eastern Australia and parts of central Australia, roughly east of a line from Rockhampton to Port Lincoln in the late evening of Thursday 25 April (between around 11 pm ACST and 11:30 pm AEST). The further west you go from the line the lower the Moon will be to the horizon. 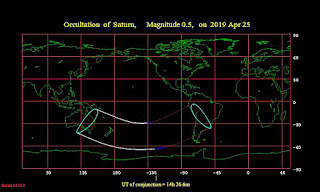 Path of the occultation of Saturn over Australia  (source, IOTA).

You will need a level, clear eastern horizon to see the occulatation at it's best.

Exact timing for several cities and observation hints can be found at my occultation page.