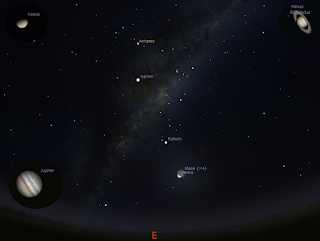 Morning  sky on Sunday, March 3 looking east as seen from Adelaide at 5:37 ACDST (90 minutes before sunrise). Jupiter is high in the morning sky above the pair of Venus and Saturn.

Mercury  returns to the morning sky but is too close to the horizon to see in the twilight until the end of the month.

Venus is high in the morning skies and is close to the crescent Moon on the 3rd.  In even small telescopes it is a "gibbous moon"shape.

Jupiter is close to waning Moon on the 27th.

Mars is close to the crescent Moon on the 11th.

Saturn climbs higher in the morning sky leaving Venus behind.