The Last Quarter Moon is Tuesday, February 26. Mars is visible low in the evening skies.  Jupiter is high in the morning skies above Saturn and bright Venus. The waning Moon is close to Jupiter on the 28th. Saturn pulls away from Venus over the week. Comet C/2018 Y1 (Iwamoto) is be bright enough to be easily seen in binoculars but moonlight interferes early in the week. 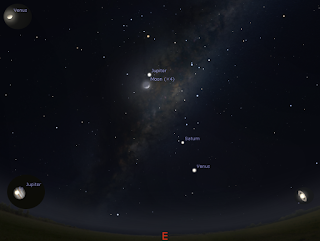 Morning  sky on Thursday, February 28 looking east as seen from Adelaide at 5:32 ACDST (90 minutes before sunrise). Jupiter is high in the morning sky above the pair of Venus and Saturn below it. At this time Venus and Saturn are moving away from each other. The left upper insert inset shows the telescopic view of Venus at this time. the lower left insert shows the telescopic view of Jupiter at the same scale and the lower right that of Saturn. 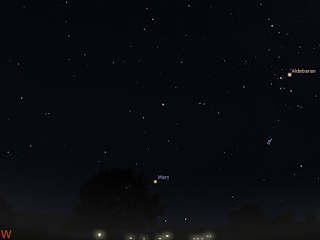 Evening sky on  Saturday, February 23 as seen looking north-west from Adelaide at 21:30 ACDST (90 minutes after sunset). Mars is the brightest object above the western horizon. 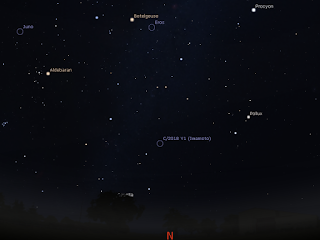 C/2018 Y1 is a "bright" comet that should be readily visible in binoculars, however, at the beginning of the week the Moon interferes significantly with seeing it. Later in the week the comet is well placed for viewing. However this is the last week of good viewing from Australia.


Venus is bright in the morning skies below Jupiter and Saturn. The pair are closest on the 19th. but are now moving away from each other as Saturn climbs higher.

Mars is in Pisces and is readily seen as the brightest object in the western evening sky. Mars sets around 10:30pm.