The Full Moon is Monday, January 21. This is a perigee full Moon. Mars is visible low in the evening skies. Venus is bright in the morning sky and Jupiter below is closing in on it. The pair are closest on the 23rd. Saturn climbs higher in the morning sky.

The Full Moon is Monday, January 21. This is a perigee full Moon, also called a "super Moon" (although perigee is technically the next day, the full Moon of February  19 is closer to perigee). There is also a total Lunar eclipse, but this will not be seen in Australia. 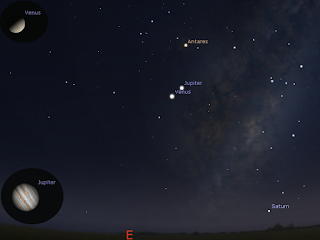 Morning twilight sky on Wednesday, January 23 looking east as seen from Adelaide at 5:40 ACDST (40 minutes before sunrise). Venus is bright and is at its  closest to Jupiter.  Saturn is low to the horizon. The left upper insert inset shows the telescopic view of Venus at this time. the lower insert shows the telescopic view of Jupiter at the same scale. 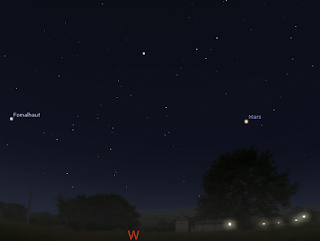 Evening sky on  Saturday, January 19 as seen looking west from Adelaide at 22:12 ACDST (90 minutes after sunset). Mars is the brightest object above the western horizon. 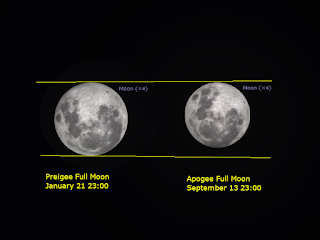 Chart comparing the binocular/telescopic appearance of the January 21 2019  Full Perigee Moon with the apogee Moon of  September 13 2019 .This year's perigee Moon on January 21will be slightly smaller than the February one. Click to embiggen.

The problem is, while the Moon is close this time around, it doesn't actually translate into something you can easily see with your unaided eye. Mondays Full Moon will be around 14% larger and 30% brighter than September's apogee Full Moon.So unless you have a good memory, you won't wee much (but it will be a good opportunity to photograph the full Moon, then again in September and compare the images.

Venus climbs higher in the morning skies and Jupiter is heading towards it. The pair are closest on the 23rd.

Jupiter  climbs higher in the morning sky heading towards Venus. The pair are closest on the 23rd.


Mars is in Pisces and is readily seen as the brightest object in the western evening sky. Mars sets just before midnight.

Saturn is climbs higher in the morning sky although it is still quite  low.