The Last Quarter Moon is Saturday, December 29. The Earth is at Perihelion. Mars is visible low in the evening skies.  Venus is bright in the morning sky with Mercury and Jupiter below. Venus is visited by the crescent Moon on the 2nd. The Milky way  graces the evening sky.

The Last Quarter Moon is Saturday, December 29. The Earth is at Perihelion on January 3, where it is closest to the Sun. 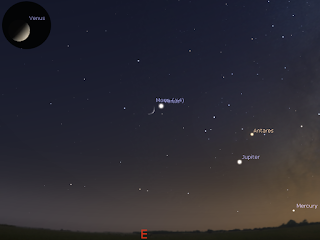 Morning twilight sky on Wednesday, January 2 looking east as seen from Adelaide at 5:15 ACDST (45 minutes before sunrise). Venus is bright with Mercury and Jupiter low to the horizon below it. The crescent Moon is close to Venus. The left inset shows the telescopic view of Venus at this time. 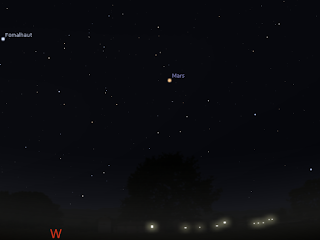 Evening sky on  Saturday, December 29 as seen looking west from Adelaide at 22:18 ACDST (90 minutes after sunset). Mars is the brightest object above the western horizon. 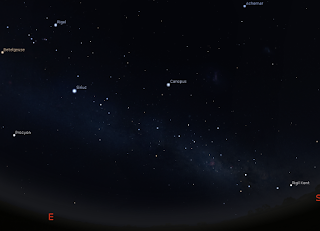 Evening sky on  Saturday, December 29 as seen looking South-east from Adelaide at 22:18 ACDST (90 minutes after sunset).


Venus climbs higher in the morning skies and is visited by the Moon on January 2.