My mother, Monica Margaret Musgrave (nee Palmer), passed away peacefully in her sleep on the morning of 28 October at 96 years old. This post is based on a personal reflection I gave at her funeral. 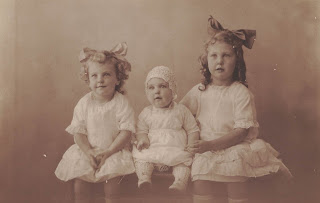 No person is a single thing in the course of their life, there are many threads that weave through and today we have heard some of the important strands that made up mum’s life. No one word can sum up a rich life of so many years, but in this personal reflection of my mum I think the word “service”
provides the warp to the weft of mums life.

The most vivid memory I have of mum, I was never there for. Mum and dad wanted us boys to have a good education, and to have opportunities that they never had. So mum lined up outside the gates of Brisbane State High School at 4 am so that myself and Ben could be enrolled in the free intake. We have no idea how she got there (did dad take her?) and mum never really spoke of it, but it was typical of the kinds of lengths mum would go to for us kids. 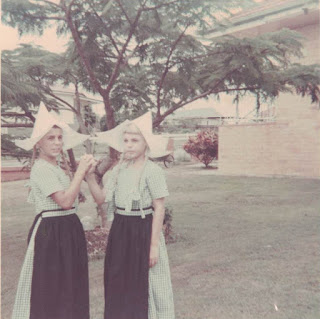 So many things mum did, from teaching us to climb trees with the poinsettia in the front yard, to sewing us “Dutch Girl” costumes for some scout play (afterwards she would tell us that it was okay to wear a dress occasionally but “we shouldn’t make a habit of it”). Mum was well known for knitting and crocheting, and would crochet everything to within an inch of its life.

No greater love has a young man for his mother than accepting crocheted clothes hangers and hanging them in his cupboard. When I designed a logo for the Queensland Institute of Technology Bushwalking club (euphoniously named QUIT BWUCK) mum laboriously converted it to a knitting pattern and knitted a tasteful black and yellow jumper for me … thanks mum. 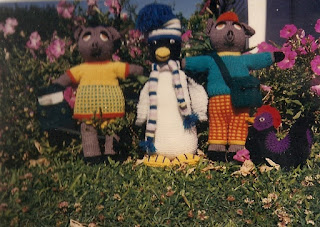 On the holidays at Coolum mum would play endless games of Zookeeper with us (I always tried to collect Pachyderms and Reptiles, Ben favoured Big cats), Mum and Ben would team up to tickle me mercilessly. On family picnics, mum’s wicker picnic basket made every picnic a special event. Well-ordered Plates, Knives, forks, and billy tea made over an open fire.

When we were attending QIT mum would wait up for us to come home, not necessarily what a young lad wants when coming back late, although I was mostly studying late at the library, some of the late nights putting the student Newspaper together were not mums idea of what I should be doing. Ben can tell you his stories in person. Mum would always have dinner waiting for me when I got home however late.

Mums cooking skills were legendary, my brother Ben commented she could burn water, but at that hour dehydrated meat and anonymous mashed vegetables were ambrosia. When writing up my final year project with my lab partner Joy Brush mum stayed up far too late converting my horrible writing into neat typing.

If mum was notorious for her cooking her cups of tea were renowned. Visitors to mums place were always greeted with a cup of tea (or later, more sophisticated Nescafe 43). I have very warm memories of my friends crammed around the tiny table in our tiny kitchen quaffing mums tea. My tall friend Rob Walpole would stride up and down the kitchen expounding on some topic or other while tiny mum chased after him with his cuppa. 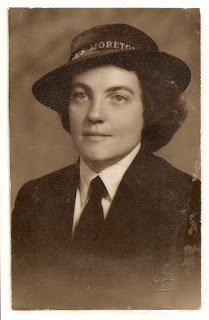 From 1944 to 1946 Mum served in the Women’s Royal Australian Naval Service as a tele-typiste. During her two years with WRANS her service to her country was acknowledged when Mum was awarded the war medal. Her service was acknowledged further at the funeral by her casket bearing the white ensign and the WRANS performing a poppy service.

Mum was also devoted to the Bowls club, she and dad were foundation members, and later mum would be made a life member and have a green named after her.

But over the years the cuppas remained constant. In the later years when I visited, we would sit companionably side by side with a cuppa each watching TV (turned up to a volume that shook the windows). When looking at the photos in preparing for this I know that there are more people who enriched her life and in turn who enriched hers, than I have had a chance to acknowledge, her beloved sisters, nieces and nephews, grandchildren and great grandchildren, friends and neighbours. 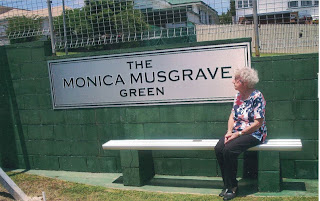 Many could sadly not be at the funeral, as the threads of their lives unravelled by time, but many family and friends made the sometimes-difficult journey to celebrate the weave of mum's life, and were important threads in that weave.

I will leave you with this last image, mum curled up asleep in her chair in the flickering light of the TV, watched over by pictures of Frank, my son Jack, and all the other family and friends from Bowls and WRANS, at peace and safe in their regard. 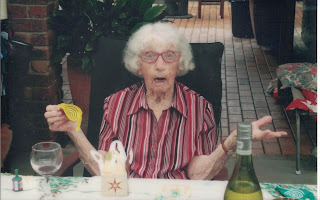