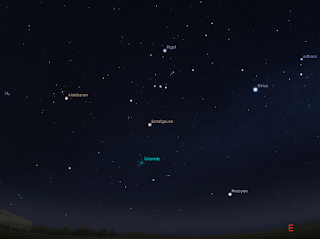 Morning sky as seen from Adelaide facing north-east at 2:00 am ACDST on 22 October, the Orionid radiant is indicated with a starburst. Similar views will be seen elsewhere in Australia at an equivalent local time. Click to embiggen.

This year the nearly full Moon interferes with the shower, but is far enough away that you can block its light out for reasonable viewing. 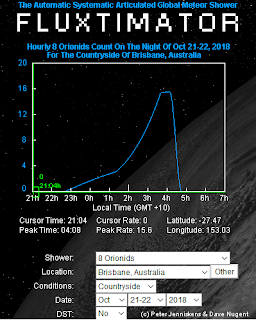 You can find out the predicted rates for your location using the NASA meteor flux estimator (use 8 Orionids and make sure you set the dates to 21-22 October 2018).
Unfortunately, both Chrome and Firefox have changed their security settings to prevent plugins from running, and the flux estimator only runs under Internet Explorer now.
You can follow the progress of the shower at the IMO Orionids live page.

The following table show the predicted peak rates at around 5 am local time on the mornings of the 21st, 22nd and 23rd of October for a number of cities under dark sky conditions (rates under suburban or city light conditions will be lower). Rates will be similar at the same latitude as these cities, and rates will be intermediate at spots between these cities.