The Full Moon is Sunday, August 26.  4 bright unaided eye planets can be seen in the evening sky. Venus is high in the early evening sky coming close to the bright star Spica. Jupiter is past opposition, but is still big and bright in telescopes. Saturn and  Mars are visible in the evening skies. Mars is visited by the waxing Moon on the 23rd. Mars is just past opposition but is still bright and big in even small telescopes. There is a series of bright International Space Station passes this week.

The Full Moon is Sunday, August 26. 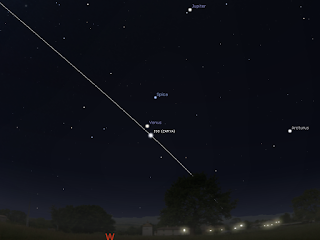 The ISS passes below Venus as seen from Adelaide on the  evening of Friday 24 August at 19:18 ACST. Simulated in Stellarium (the ISS will actually be a bright dot), click to embiggen.

This week will see the International Space Sation return  to the evening skies, with som e cole passes to the bright planet Venus between the 24th to 26th, as well as close passes to Mars and bright stars. This is very location dependent, so see my ISS pass page for details. 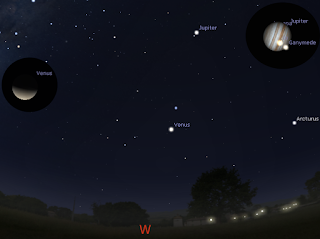 Evening twilight sky on Saturday August 25 looking west as seen from Adelaide at 19:16 ACST (90 minutes after sunset). Venus is high above the horizon and coming closer to Spica. Jupiter is now high in the western sky as well.

The insets shows  simulated telescopic views of Venus as seen with a 5mm telescopic eyepiece and Jupiter on Wednesday the 29th as Ion, Ganymede and their shadows pass over Jupiter's face at 19:16 ACST .


Similar views will be seen throughout Australia at the equivalent local time (90 minutes after sunset, click to embiggen). 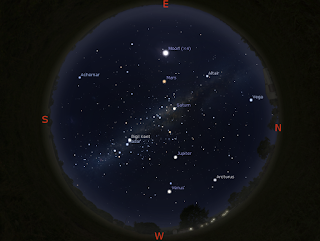 Whole sky view of the evening sky on Saturday August 25 as seen from Adelaide at 19:16 ACST (90 minutes after sunset).  Four bright planets and the nearly full Moon are visible in the evening sky.


Similar views will be seen throughout Australia at the equivalent local time (just after 90 minutes after sunset, click to embiggen). 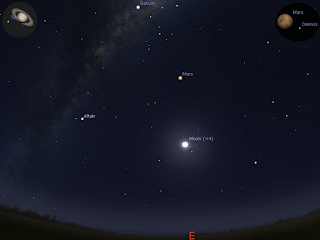 Evening sky on Saturday August 25 looking east  as seen from Adelaide at 19:16 ACST (90 minutes after sunset). Saturn and Mars are clearly visible with the waxing Moon below Mars. The insets are simulated telescopic views of Saturn and Mars as seen with a 5mm telescopic eyepiece.


Venus  is  readily visible above the horizon in the early evening.  It is bright enough to be visible from just on sunset and to well past 90 minutes after sunset at full dark, when it is two and a half hand-spans above the horizon.  During the week Venus moves closer to the bright star Spica and is passed by the ISS during the week.

Mercury is deep in the twilight in the morning skies and very difficult to see.

Jupiter  is high in the early evening sky above the north-western horizon. It was at Opposition on the May 9th, and is still visible most of the night. It is  a good telescopic object in the early to mid-evening and is setting just before midnight local time. There are some good Jovian Moon events this week. This week Jupiter moving away from the bright star alpha Librae (Zubenelgenubi).

Mars is in Capricornius and is readily seen in the evening. Mars was at opposition last month on July 27th,  when it was biggest and brightest as seen from Earth. This was the best opposition since 2003. However Mars will remain bright and large in even small telescopes for some time. In a telescope you may see a few features as the huge dust storm sweeping the planet continues to subside.  A guide to observing Mars at the time is at my Mars Opposition page. The Moon is close to Mars on the 23rd.

Saturn is now high in the northern evening sky in the early evening, and isa good telescopic object in the mid to late evening sky. It was at opposition, when Saturn is biggest and brightest as seen from Earth, on June the 27th. It is within binocular range of  the Trifid and Lagoon nebulae. However the increasing Moon light makes seen these nebula more difficult.