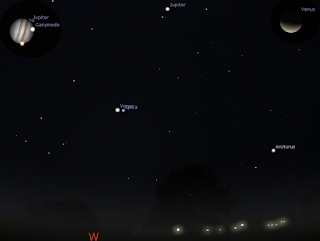 
Mercury is lost in the twilight and returns to the evening sky late in the month.

Venus is closest to the bright star Spica on the 1st, and is at its brighest on the 23rd.

Mars was at opposition on July the 27th, this is the best opposition since 2003. It is still a very good telescopic target. More details at my Mars opposition site. September 20, Moon and Mars close.

Saturn is within a binocular field of the the Trifid Nebula and Lagoon Nebula this month. September 17 Moon close to Saturn.