The Last Quarter Moon is Tuesday, May 8.  Venus is high in the twilight and starts the week near the bright star Aldebaran. Jupiter is at opposition, when it is biggest and brightest as seen from Earth, on the 9th. Venus is setting as Jupiter is rising. Mars and Saturn are visible in the late evening skies. The Moon visits Saturn on the 4th and Mars on the 6th. Eta Aquarid meteor shower peaks on the mornings of 7th-8th. Mercury is prominent in the morning skies.

The Last Quarter Moon is Tuesday, May 8. 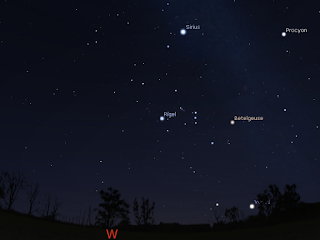 Evening twilight sky on Saturday May 5 looking west as seen from Adelaide at 18:26 ACST (60 minutes after sunset). Venus is to the right of the the bright star Aldebaran. 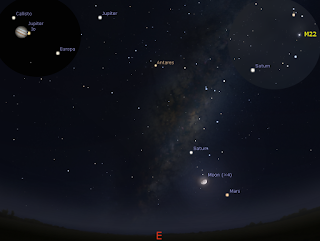 Evening sky on Saturday May 5 looking east  as seen from Adelaide at 23:00 ACST  . Jupiter is  high above the horizon, Saturn and Mars are clearly visible and the waning Moon is between Mars and Saturn. 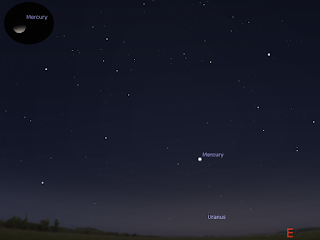 Morning sky on Saturday May 5 looking east as seen from Adelaide at 5:58 ACST (60 minutes before sunrise). Mercury is the brightest object closest to the eastern horizon. The inset shows a simulated telescopic view of Mercury. 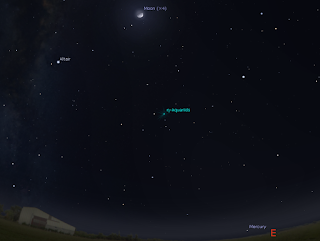 Morning sky on Tuesday May 7 looking east as seen from Adelaide at 5:00 am local time in South Australia showing the eta Aquariid meteor shower radiant as a star burst. Similar views will be seen elsewhere at the equivalent local time (click to embiggen).
The eta Aquarid meteor shower peaks on the morning of 7 May in Australia, although good rates will be seen on the mornings of the 8th and 9th.

The eta Aquarids are debris from Halleys comet. The radiant rises around 2 am May 7. But the best viewing is between around 4 and 5 am, when Aquarius is fairly high above the horizon and the crescent Moon is low. You may see between 1-3 meteors every 5 minutes at this time. The radiant of the shower is about five hand-spans up from the eastern horizon, and three hand-spans to the left of due east at 4 am (see diagram above). You will also see decent rates on the 8th and 9th. However the waning Moon will reduce the number of meteors seen.

Venus starts the week near the bight red Star Aldebaran. Venus is closest to Aldebaran on Thursday May 3, then draws away as it moves between the sarts that form the "horns" of Taurus the Bull.

Mercury is prominent the morning sky, and now is in an excellent position for observation and is the brightest object above the eastern horizon. Mercury is now high enough for telescope observation. In even a small telescope the "half moon" shape of Mercury will be visible.

Jupiter  is rising in the early evening as Venus is setting. It is at Opposition on the 9th, when it is visible all night long  and is  a good telescopic object in the late evening. There are some good Jovian Moon events this week.

Mars is in Sagittarius the archer and is now rising in the late evening. Mars is moving away from Saturn although the pair are still obvious together.   Mars is brightening ahead of opposition later this year. On the 5th The Moon is between Mars and Saturn, and on the 6th the waning Moon is close to Mars.

Saturn is climbing higher the evening sky, although telescopically it is still best in the morning sky. It is within binocular range of several attractive clusters and nebula. It is close to the bright globular cluster M22 and the pair are visible in binoculars and wide field telescope eyepieces. On the 4th The waning Moon is close to Saturn and on the 5th The Moon is between Mars and Saturn.