The New Moon is Monday, April 16.  Venus is low in the twilight and is visited by the Moon on the 19th. Jupiter is now rising in the early evening skies. Mars and Saturn are now visible in the late evening skies. Mercury returns to the morning skies. 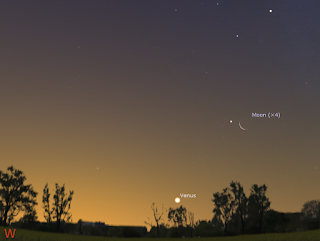 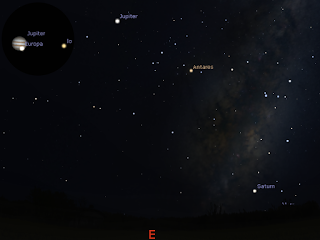 Evening sky on Saturday April 14 looking east  as seen from Adelaide at 23:00ACST. Jupiter is  high above the horizon. Close to the horizon Saturn is just rising, and Mars will soon follow.

The inset is a simulated telescopic view of Jupiter and its moons at 1:30 ACST on the 15th, with Ganymede and its shadow transiting the face of Jupiter. 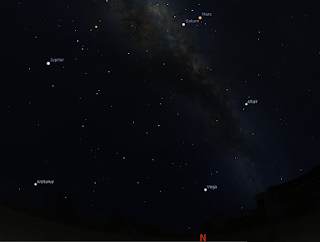 Morning sky on Saturday April 14 looking north as seen from Adelaide at 5:14 ACST (90 minutes before sunrise). Mars and Saturn are high above the northern horizon and good telescopic viewing.

Mercury has returned to the morning sky, but will be difficult to see until next week.

Jupiter  is rising in the early evening, and is now a good telescopic object in the late evening. There are some good Jovian Moon events this week.

Saturn has entered the evening sky, although telescopically it is still best in the morning sky. It is within binocular range of several attractive clusters and nebula. It is close to the bright globular cluster M22 and the pair are visible in binoculars and wide field telescope eyepieces. Saturn is at aphelion on the 17th and appears motionless against the background stars.